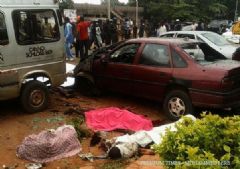 Victims of suicide bombing in Damaturu

A teenage female suicide bomber blew herself up at crowded bus station in northeast Nigeria on Sunday, killing at least 16 and wounding 30 others.

Most of the victims were children who had either been selling peanuts or begging for money at the time of the explosion, said witnesses.

The bomber managed to get through the security check at the entrance to the bus station in Damaturu, the capital of Yobe state, and detonated herself at 1 p.m. local time.

"It was an eyesore looking at the scene which is littered with chopped flesh and battered bodies of victims," said Hassan Umar. The suicide bomber was a teenager, said Mr. Umar, who said he saw her remains.

"The girl that carried out the suicide should be around 16 years old, because her face was a bit matured," he said.

N o one has yet claimed responsibility for the bombing but it fits the pattern of violence by Boko Haram, Nigeria's homegrown Islamic extremist group that caused an estimated 10,000 deaths last year and is fighting to impose Islamic Shariah rule over Nigeria.

Last year, Boko Haram began using teenage females as suicide bombers, probably because they can evade security by hiding explosives under their hijab garments. In April, the extremists kidnapped more than 200 schoolgirls who remain missing.

This is the first suicide bombing in Damaturu. The city of about 90,000 people in northeastern Nigeria has suffered several attacks by Boko Haram in past three years. On Dec. 1, Boko Haram attempted to seize Damuturu, but was repelled after a lengthy battle with many casualties.

In recent weeks Boko Haram have attacked the neighboring countries of Cameroon, Niger and Chad. Those countries and others are planning to form a joint force to help Nigeria battle the extremists.