U.N. Inaction on Democratic Republic of the Congo
All Actions of the UN Human Rights System Critical of Specific States, 2015 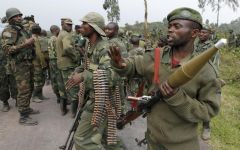 The United Nations has reportedly given the Congolese government a two-week deadline in which to remove two generals accused of human rights abuses from their upcoming military campaign against rebels in the east of the DRC, or else risk losing all UN support.

A senior UN official told Reuters on Wednesday that they had been in contact with Congolese foreign minister Raymond Tshibanda, and clearly stated: "If you keep these guys we're not going to be in a position to support you ... get these people out."

Today, however, government spokesman Lambert Mende reportedly suggested that the country would not honor these calls, saying the proposed operation is a "decision of sovereignty."

General Bruno Mandevu was appointed on January 25 to head a Congolese army (FARDC) operation against the Democratic Forces for the Liberation of Rwanda (FDLR), a mission which was to be supported with forces from the UN peacekeeping mission in Congo (MONUSCO).

Five days later it emerged that Mandevu has been accused of 121 rights violations - including allegations of rape and performing summary executions.

The other military man believed to be implicated is General Fall Sikabwe, who was appointed commander of the 34th military region.

While speaking at an inauguration ceremony in Goma, eastern Congo, on Monday, Sikabwe stated: "The image of the FARDC is poor throughout the world. It is necessary to do everything to change that image. Our first mission as soldiers is to defend territorial integrity."

This news comes as reports emerge of further massacres in the country. At least 21 people are believed to have been killed in the village of Mayangose, North Kivu, on Tuesday night. A separate attack is also believed to have occurred in Kasu, Eastern Province, during which several villagers were beheaded.

Yetn the wake of these attacks, doubts about the recently appointed military leaders do not seem to have been publicly highlighted. Speaking on Wednesday, MONUSCO mission chief Martin Kobler said: "Nothing will deter MONUSCO from its purpose to neutralize all armed groups terrorising the population. We will support the Congolese authorities to ensure that everything is done to prosecute the perpetrators of these atrocious killings and bring them to justice."

Kobler reiterated the commitment of MONUSCO to combating the conflict in the east. "We will continue our active support for security operations by the FARDC, so tranquillity can return to Beni and throughout eastern DRC," he said.

Yet, on January 30, a senior MONUSCO official told Reuters on condition of anonymity: "If, because of the past record of units or their commanders, there are substantial grounds to believe there is a real risk that they commit grave human rights violations, support to those units will be withheld unless adequate mitigating measures can be put in place."

"In this particular case, this process has brought to light some concerns that have been brought to the attention of the DRC government. Discussions are underway at the highest level to address them," the official said.

Reuters also reported that western diplomats told them Mandevu is on a "red list" created by MONUSCO.

MONUSCO took over from a former UN peacekeeping operation in 2010. Their mandate includes authorization to protect civilians, humanitarian personnel, and human rights defenders under imminent threat of physical violence, and to support the DRC government in its stabilization and peace consolidation efforts.

The FDLR - or the Democratic Forces for the Liberation of Rwanda - is one of a large number of splinter rebel groups operative in eastern DRC. Many of its original members were Hutus that fled Rwanda following the 100-day genocide in 1994, during which at least 800,000 people were killed - predominantly Tutsis.

The rebel group failed to meet a January 2 deadline set for their disarmament and surrender. Attempts to launch an operation against them have already been stalled. Last month, UN spokesman Stephane Dujarric told reporters that attempts to begin a mission had been slowed down by DRC president Joseph Kabila's delay in signing a joint directive to approve the military operation, despite appeals by both the Security Council and UN secretary general Ban Ki-moon.

"We are obviously making preparations for this action," Dujarric said, according to AFP. "For such a major operation, it's important that the government be fully on board. The contacts are ongoing."

However, a man who works locally with an organization that helps rape survivors in eastern Congo told VICE News that he would have no faith in an FARDC campaign against the FDLR, even if the accused generals were removed.

Speaking on condition of anonymity because of fears of reprisal, he said that while the FDLR have committed wide-scale abuses - including raping women, and sometimes children, destroying the ecosystem, and pillaging minerals - the FARDC also terrorize the local Congolese. "In villages and cities, these soldiers at night become true enemies of the people," he said, adding that the Congolese soldiers are rarely paid regularly. "Their guns have become their tool to get money."

Rape is frequently used as a weapon of war in the DRC. Traditionally there is a high level of stigma around it, meaning that sexual assault can be utilized as a tool to subdue and control the local civilian population. An estimated 1,100 women are raped every day in the country, and the source who spoke to VICE News said that this behaviour extends to the army. "Many women have been raped by DR Congo soldiers under the command of some high-ranked soldiers," he said. "Many people have been killed by the same soldiers if they oppose the government's ideologies."

The man claimed that the FARDC and the FDLR have joint business interests, including turning profits from unauthorized fishing, mineral digging, cannabis selling, and poaching animals from national parks. The FARDC are not necessarily direct participants, but can provide protection to those doing the trading. "The Congolese army will not attack their suspected business associates," he opined.

The accusations that Congolese government officials are implicated in the pillaging of local resources are also backed by a report recently in January by Holly Dranginis for the Enough Project, in which she also points to the "lucrative income" pillaging provides for factions of the Congolese army, and calls for an ending of the culture of impunity that is associated with this.

Rwanda perceives the FDLR rebel group as a threat to its stability, and twice invaded its neighbor during the 1990s in an attempt to combat the group. Rwandan president Paul Kagame has repeatedly pushed for military action, while accusing regional governments of "making all kinds of excuses" to avoid confrontation. "When it comes to the FDLR, it's like, you know, let's wait," Kagame has said.

Rwanda has also been accused of profiteering from mineral theft in eastern DRC. In 2013, the UN Group of Experts reported that they had "confirmed a continuing pattern of smuggling (of minerals) to Rwanda and documented seizures made by the authorities of the Democratic Republic of the Congo of minerals being smuggled to Rwanda."