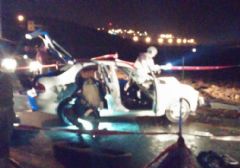 A suspected vehicular attack that injured four IDF soldiers took place in the southern West Bank on Wednesday evening near Beit Omar and the Gush Etzion bloc of settlements.

Magen David Adom reported that it treated the victims who were in their twenties at the scene of the attack and who were then evacuated to hospital in Jerusalem.

IDF forces in the area shot the suspected terrorist who was in serious condition.

The car with Israeli passengers came under attack by rock throwers who exited their vehicle and were then hit by a passing vehicle.

There was rioting and rock throwing reported at the site of the attack.

Earlier on Wednesday, a terrorist stabbed and seriously wounded a female IDF soldier in an attack in Kikar Adam, north of Jerusalem in the Binyamin region. The wounded soldier was from the Home Front Command's Kedem battalion.

A second female soldier shot and killed the knife attacker, the IDF said. Another suspect was apprehended near the scene of the attack.