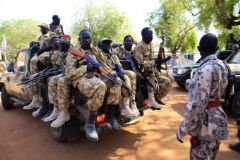 South Sudanese soldiers and gunmen have been in the middle of some of the heaviest fighting.(Reuters: James Akena)

Gunmen in South Sudan have raped girls, torched towns and looted aid supplies in one of the heaviest government offensives in the 17-month-long civil war, the UN and diplomats said Tuesday.

Over 300,000 civilians have been left without "life-saving aid" in the northern battleground state of Unity, after the UN and aid agencies pulled out due to a surge in fighting, with over 100,000 forced to flee their homes.

Boys as young as 10 have been abducted as child soldiers, the UN said, while aid groups said their bases had been ransacked.

The United States said it was "deeply disturbed by credible reports of grave human rights abuses against civilians" in the "government offensive against opposition forces."

The UN peacekeeping mission said reports from Guit and Koch counties in Unity included "towns and villages being burned, killings, abductions of males as young as 10 years of age, rape and abduction of girls and women, and the forced displacement of civilians".

Government forces are pushing towards the cut-off opposition zone around the town of Leer, home to some of the country's once lucrative oil fields.

The ICRC has withdrawn staff from Leer and warned that escalating fighting between forces loyal to President Salva Kiir and rebel leader Riek Machar was forcing thousands of civilians to flee for their lives yet again.

Some 120,000 displaced people were sheltering in Leer, Rauchenstein told AFP Tuesday, warning that "now they were moving out into the swamps to hide, where they have no access to food or healthcare".

"Our forces... are now pursuing them to where they came from," Monytuil said.

Doctors Without Borders (MSF) said Saturday it was forced to evacuate its foreign staff from Leer and halt all medical services amid fears the rebel-held town was about to come under "imminent attack".

Leer, the birthplace of Machar, was ransacked by government forces in January 2014. Gunmen looted the MSF hospital and burned some of the buildings.

MSF has since rebuilt the hospital, the only referral facility in opposition areas.

International Rescue Committee country chief Ronald-Paul Veilleux said their base in Koch, which once provided food and healthcare to 35,000 people, "has been destroyed".

South Sudan's civil war began in December 2013 and has been characterised by ethnically-driven massacres, rape and attacks on civilians and medical facilities.

Peace talks in neighbouring Ethiopia have so far failed to reach any lasting agreement, or even an effective ceasefire.

The violence, which has escalated into an ethnic conflict involving multiple armed groups, has killed tens of thousands of people in the world's youngest nation, which gained independence from Sudan in 2011.

It has also left over half of the country's 12 million people in need of aid, with 2.5 million people facing severe food insecurity, according to the UN.

"If they fail to make the necessary effort for peace, they will inevitably be held responsible also for the consequences," he said in a statement.