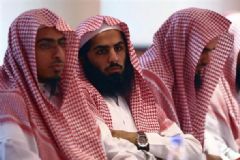 It was Saudi National Day. Many of the people in the street were euphoric. All of the religious zealots were outraged. The former were celebrating, relaxing, going wild and having a good time. The latter were watching the Will of God being challenged, virtue being transgressed, grave sin being committed. In such a situation things had to happen. Most zealots in Saudi Arabia have no formal authority so they simply watched in anger and dismay. But there are about 4000 of those who are employees in a government institution whose mandate is to fight sin. They work in The Committee for Promotion of Virtue and The Prevention of Vice. In Saudi Arabia it is called "the committee" while popular foreign media calls them "the religious police." All of the committee's members were aware that the government has makes an exception as to what is publicly allowed on National Day. They knew that they should not take action against the "sins" committed on that day. But self-control is not a quality zealots are known for, particularly in the presence of those defying God Almighty's Will. So there were a number of cases where they harassed celebrators. But all of those were over shadowed by the tragic death of two citizens. We do not know all the details yet. But we do know that there was a car chase between the committee and another car. And that the committee's car rammed the other one which lost control and went off a bridge. One driver was immediately killed. The second died later in hospital. They were brothers.

The word "Luckily" does not seem appropriate in such a situation. Luck failed the two brothers. Yet for the sake of justice "luckily" someone had videoed the chase and the wrecked car on his mobile phone. He uploaded it to YouTube and it went viral. Public outrage followed. After a brief attempt to deny any relation to it, the committee resorted to attacking the character of drivers. They were drunk it was claimed. Later tests would show no traces of alcohol or narcotics in either of the bothers' blood. Eventually the story got too big for them to cover, and they promised a "fair" investigation.

Tragedy
This was not first tragedy caused by members of the committee. Nor was this the first case where social media was the public's tool to relate what had happened and to demand justice. In the past few years there have been more than one death or serious accident caused by them. And while most cases happened before the advent of social media, there were enough cases that went public, causing shock and disdain. Editorials have been written demanding the reform of the committee. Some writers demanded dismantling the whole institution. One writer said we should be forbidding the vice which the committee itself is perpetrating. Another writer asked: how many "isolated incidents" need to happen before we say there is an institutional problem? He was responding to those defending the committee on grounds that one should not take isolated incidents as a measure of the value or effectiveness of the committee. For many private citizens the sight of the committee has become a source of fear and anxiety.

The committee is - by modern standards - a peculiar organization. Its mandate is to ensure the absence of public sin; that is enforce "modest"' dress code on women, to combat flirting and gender mixing, to enforce prayer on people who are in public spaces, to make sure that shops shut down during prayer time, to control the way young men dress and their hairstyles, to fight witchcraft... the list goes on. It also takes up roles in fighting alcohol production and dealing drugs. The definition of "sin" is extremely elastic making their jurisdiction quite broad and most of the times defined by the members of the committee themselves.

Origin
Its origin goes back to 1927 at the time of King Abdul Aziz and from then on it gradually developed in its institutional organization and authority. And it has always been considered a central organization in the eyes of the successive Saudi monarchs as well as the religious establishment. The reasons vary. To start with, there has been a continuous deep seated belief that the Saudi state must uphold the values of promoting virtue and preventing vice. And the committee was the institutional embodiment of that belief. But statesmen do not create institutions with authority simply to accommodate their beliefs. There was also a strategic gain. From the beginnings of the reign of the King Abdul Aziz it was recognized that unless the Saudi state contained its religious zealots, the fate of the state would be that of the first two Saudi states; their internal divisions and subsequent demise were driven by zealotry. One way to contain zealots is to employ them. And from the perspective of the state the benefits of such an approach far outweighed the costs.

Moreover, there is no doubt that the general concept of promoting virtue and preventing vice is indeed an Islamic value. One can even consider it a universal value. But once one goes down to identifying the meanings of promoting, virtue and vice; then things become complicated. The question is ultimately one of authority and the answer is also one of authority. Those who have the authority to delineate the concept are also those who will be legitimizing the authority to whoever is promoting virtue and preventing vice. This makes it a very political issue which any ruler would be keen to control. Thus the committee may have given the Saudi government bad PR internationally and it aggravated a broad sector of the population internally. But for the statesman such things are tolerable considering the alternative of having thousands of unemployed zealots. The institutionalization of "promoting virtue and preventing vice" ended up serving the monarchs' beliefs as well as their political needs. For the religious establishment, this meant more power. Here they had an organization that answers directly to the king and with a sizable budget. I need to add that in a conservative society like Saudi Arabia there have been many who were happy that the committee existed. This is another reason for the durability of the committee despite its casualties.

Historically there have been similar institutions. Muslims rulers used to appoint individuals to watch markets and report cheating. Those individuals were also supposed to intervene in cases of public obscenity â obscenity as socially and religiously defined according to the values of the time and place. Those people were employees doing a job. There were also private individuals who used to combat what they deemed as sin. Most of the time they would target private individuals; say by breaking their musical instruments. Sometimes they would target a regional governor or a ruler if they saw him committing too many transgressions. And in other cases those individuals would ally with whoever is in power to fight dissenting ideas such as philosophy and some forms of science. Thus when the committee was formally created in Saudi Arabia to organize promoting virtue and preventing vice many considered it a continuation of an old practice albeit using modern techniques of management. We find many writers stating that the committee is simply a stage in the evolution of a practice enshrined in Islamic belief and rooted in historical practice. Nonetheless opponents of the committee say that this is a medieval practice and a modernized form of The Inquisition. They say that even if it existed in the past, it has now become outdated and should be abolished.

Without precedence
My view is that this is an institution without precedence. It is true that people have been promoting virtue and preventing vice since the early days of Islam; but they were doing it in a religious environment permeated by an enchanted worldview. In a world that did not develop our notions of public and private spheres. In a world where conformity was a value that served political and security needs. The function of promoting virtue and preventing vice cannot be detached from that context which gave it meaning and significance. Most importantly its "institutional legitimacy" was not different than other authoritative institutions. Every authority was serving God's will and deriving its legitimacy from that service. In other words, promoting virtue and preventing vice, was not unique.

Today however religious communities do not live in an enchanted world â at least compared to the past. Modern notions of public and private â in their varieties - are now part of our daily lives. Conformity has been relegated to a social value with very little - if any - political significance. And now most authorities are secularized. What used to be an important component of social order is now a violation of personal space. What used to be just another embodiment of God's Will amongst others everywhere, is now an organization that has exclusive ownership of the Divine Will. Today The Committee for Promotion of Virtue and The Prevention of Vice is indeed a very modern institution.

Consider this for a moment: when a member of the committee walks near a policeman, he thinks of himself as an agent of God, while he thinks of the policeman as an agent of the state. This is not a pre-modern phenomenon. Moreover this is definitely not the kind of thinking you want floating around. And herein lies the danger of such an organization. It is not in their lack of personal skills. It is not in their abuses. It is not even in their violation of individual space. Those are problem for sure, but they can be rectified with better training, more oversight and public debates. The root problem is their view of themselves, and as long as that does not change, solving the other issues is useless.

Today much of the debate about the committee revolves around: how they should behave; the sort of restrictions that should be applied on them; what promotion is; and how virtue and vice are defined. This is not enough. We should be discussing their institutional creed. Are they a pious elite with a mandate to fight the devil and accountable to God or are they civil servants with a mandate to promote civil values and accountable to the state and society? Are they "Agents of God" or "Agents of the State and Society?" In my view this is the central issue which should be highlighted and debated. We should be asking ourselves if as society we can accept a public office that acts as a Modern Agent of God.