U.N. Inaction on Guinea
All Actions of the UN Human Rights System Critical of Specific States, 2009 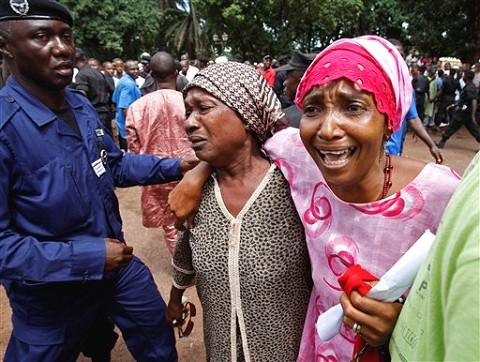 Woman reacts as she and others look for bodies of family members and friends that were killed during rally in Conakry, 2 Oct 2009.
Source: AP.

A Human Rights Watch report released today contradicts claims by Guinea military leader Moussa Dadis Camara and his would-be assassin, Lt. Abubakar "Toumba" Diakite, that they were not responsible for the Sept. 28 massacre. At least 150 Guineans were killed in an afternoon.

Who is responsible for the massacre by uniformed soldiers, police, and militiamen that killed at least 150 pro-democracy demonstrators in Guinea?

A report by Human Rights Watch, released today, presents evidence that Guinea's ruling military party organized and carried out the Sept. 28, 2009 massacre â and of speedily organizing a cover-up. The murders, rapes, and abuses by security forces that day "rise to the level of crimes against humanity," it says.

The massacre's alleged leaders continue to deny responsibility. There have been near-blanket international calls for Guinea to account for the atrocities, as well as diplomatic pressure for Guinea's military junta to step aside and, as promised, allow national elections.

Military junta leader Moussa Dadis Camara has said that the stadium massacre was carried out by rogue militants. He is in a Moroccan hospital after surviving an assassination attempt Dec. 3 by an aide, Lt. Abubakar "Toumba" Diakite. Now in hiding, Diakite told French radio Wednesday that he shot Camara because the captain would try to pin responsibility for the massacre on him.

"Really, the sort of abuses perpetrated by the Guinean security forces have never stopped. I mean, they have their surges," says Corrine Dufka, a senior researcher for Human Rights Watch who co-authored the report, "Bloody Monday: The September 28 Massacre and Rapes by Security Forces in Guinea." (Read the report here.) The group has confirmed at least two deaths in military detention since the assassination attempt, Ms. Dufka adds in a telephone interview from Dakar, Senegal.

Camara has not spoken publicly since being hospitalized in Morocco.

Why did Guinea erupt into violence?

The coastal West African nation of 10 million has been under the military rule since last December, when Camara seized the former French colony in a bloodless coup after the death of President Lansana Conte. Though rich in minerals, gold, and diamonds, Guinea is one of the world's most impoverished nations. It is a major transit point for cocaine between Latin America and Europe.

Camara came to power promising to hold free elections in which neither he nor the military from his party, the National Council for Democracy and Development (CNDD), could run. But he backtracked in the fall and said CNDD members could run. Tens of thousands opposition gathered Sept. 28 in a largely peaceful demonstration in the stadium in the capital city Conakry. Pro-democracy leaders advised Camara's forces of their plans beforehand, the HRW report documents.

But security forces met the protesters with indiscriminate fire. HRW says it did not find evidence that protesters were armed. The report, based on 240 interviews with victims, relatives of the dead, and others with knowledge of the crimes, says the details of the massacre suggests it was "premeditated and organized." The majority of killings and sexual assaults were carried out by members of the Presidential Guard, the report says.

Diakate's claim that he was not responsible for the massacre is contradicted by many witnesses interviewed, says Dufka. "They described him as leading his troops," she says.

"Toumba [Lieutenant Abubakar "Toumba" DiakitÃ©] pointed his rifle in our direction and fired at us, and it was then that I realized they had come to kill.... Outside the main stadium, the red berets [presidential guard] were chasing us."

In addition to the indiscriminate and widespread murders, at least 63 women were raped, many in broad daylight and often by gangs of soldiers, the report says. It adds that the rapes are probably underreported because of the "profound stigma" attached to sexual violence in Guinea's conservative, majority Muslim society.

One unmarried victim of sexual assault who had scars on her hands and back described to HRW her surprise at the extent of rape in the stadium: "I could barely walk. I fell down several times. ... I never thought the soldiers would be thinking about or have time for raping in the middle of their attack."

Dufka says there are no concrete plans for elections in Guinea soon. Military and opposition leaders are waiting to see if Camara will return from Morocco. Dufka anticipated military infighting over a replacement leader if not. "We're in a very precarious holding pattern," she says.

While the global response to the massacre was almost unanimous condemnation and calls for accountability, continued economic and diplomatic support for Guinea by China and Libya "mars the otherwise unified international response."