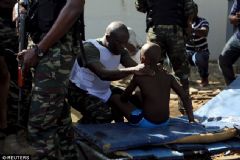 A soldier comforts an injured boy in Bassam, Ivory Coast

The heavily armed, balaclava clad shooters opened fired on guests at the L'Etoile du Sud [Southern Star] hotel which was full of expats, a witness said.

Terror group Al Qaeda in the Maghreb has claimed responsibility for the attack through one of their social media accounts, but this has not been independently verified.

Graphic images showed seven dead bodies scattered across the beach in the resort town of Grand Bassam, around 25 miles from the capital Abidjan.

And footage from a hotel balcony showed people running from their lives as the shooters tried to gun down unarmed holidaymakers.

Several French nationals may have been killed in the deadly attack, with witnesses describing how the gunmen arrived on the beach via a boat.

Josiane Sekongo, 25, who lives across from one of the town's many beachfront hotels, described the shocking moment the attack took place.

She ran outside after hearing gun fire and saw people sprinting away from the beach to hide in their homes, moments before the security forces arrived.

'I saw seven dead that I filmed. There were four attackers. I was swimming when it started and I ran away,' said Dramane Kima a local who filmed the bodies on Bassam's shore.

He also took photos of grenades and ammunition thought to have been left behind by the attackers.

A spokeswoman for the Foreign Office said officials were 'urgently' trying to establish whether any British nationals were harmed at the resort, a popular site for expats.

Today's attack was the third time in recent months that a West African tourist hotspot has been besieged by gunmen.

Dozens were killed during a siege of a Malian hotel in November, followed by an assault on a hotel and cafe in Burkina Faso in January.

Analysts have warned for months that Ivory Coast, which shares a border with both those countries, could be a potential target by jihadists as well.

'I have always said that Abidjan (Ivory Coast) and Dakar (Senegal) are the next targets for jihadist groups because these two countries represent windows of France in Africa,' said terrorism expert Lemine Ould Salem.

He said the attackers could be from the ISIS-affiliated Boko Haram terror group that has killed thousands across Africa over several years.