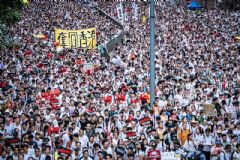 The methods were familiar but the speed and determination of police is what shocked protesters in Hong Kong the most.

Less than 24 hours after protesters - led by student and Christian groups - surrounded Hong Kong's legislative building, police were making it clear they would not tolerate another Occupy-style protest.

And so late into the evening, the police were still pushing. Not to clear the students from the legislative council building, but from streets several blocks away.

As of 10:00pm on Wednesday, 72 people had been hospitalised, including two classed as serious.

Protesters like 24-year-old Becky Ho were rattled by police methods.

"We love our city, we have to protect it, so maybe if I don't come back tomorrow, I'll come back on the weekend," he said.

Certainly some protesters spent much of Wednesday building barricades in preparation for clashes with police.

One protester was seen collecting bricks, though it was mainly water bottles and umbrellas they ended up flinging at the riot squad.

But many protesters believed a confrontation with police was needed.

They expressed a frustration that peaceful protest was increasingly falling on deaf ears in the former British colony.

They lamented how hundreds of thousands, perhaps even a million, protesters on Sunday could stop a city to raise concerns about the extradition plan only to see Hong Kong's leader Carrie Lam dismiss their worries and vow to pass the changes even more quickly.

And so many demonstrators openly acknowledged the futility of stopping the amendment.

Beijing firmly backs the plan, which Ms Lam said was about ensuring Hong Kong did not become a haven for fugitives.

Ms Lam is under tremendous pressure from Beijing not to buckle to protester demands.

In a tearful interview, she said she would never "sell out" Hong Kong and violence would not be tolerated.

She is trying to strike a conciliatory tone but it is clear she wants the changes passed and has the backing of China's Government to get it done.

And 22 years since Britain handed Hong Kong back to Chinese rule, it appears the protesters' youthful optimism has given way to a clear-eyed understanding of what they are up against. Despite that, they say they will be back out on the streets.