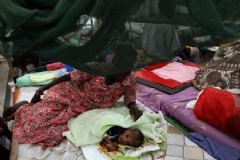 A malnourished two-month-old child lies on the bed next to his mother at a hospital in an internally displaced persons (IDP) camp in Malakal, July 24, 2014. (REUTERS/Andreea Campeanu)

Hundreds of thousands of people risk starvation in South Sudan where a resurgence in fighting and deepening food shortages have left some with nothing to eat except water lilies, the International Committee of the Red Cross said on Wednesday.

Violence had intensified in the world's youngest country in the past few weeks and troubled peace talks are unlikely to restart soon, the aid agency added, appealing for donations.

More than 100,000 people have fled the recent clashes between rebels and government forces, the Red Cross said, joining 2 million displaced since the conflict began in December 2013. "Urgent action needs to be taken to save hundreds of thousands of people in South Sudan from starvation," the ICRC said in a statement.

They are among an estimated 4.6 million South Sudanese facing severe food insecurity, up from 2.5 million at the start of the year, amid rising prices, dwindling stocks and a "disastrous" economy, it added.

"Many people in Leer county (in Unity State) have eaten water lilies in the last weeks - their only meal, the only food available," Franz Rauchenstein, head of the ICRC delegation in South Sudan, told a Geneva news briefing.

"Malnutrition rates may further rise in areas that have already reported critical or serious malnutrition levels such as counties in Jonglei, northern Bahr al Ghazal and greater Upper Nile," he said, speaking by video link from the capital Juba.

The ICRC aims to deliver food rations to 330,000 people this year in South Sudan, which declared independence from Sudan in 2011. It is its second largest operation worldwide after Syria, with a revised budget of 153 million Swiss francs ($164.92 million).

"I wouldn't talk about famine for the time-being, that is not yet the case. But we could well go into a situation where the situation becomes more dire especially in the next three to four months," said Rauchenstein, a nutritionist.

Fighting has intensified, especially in the north of Jonglei state, Unity and Upper Nile, for several reasons, Rauchenstein added.

"The most important one probably is that the peace process has not yielded any substantive results. Also there has been the dry season, towards the end of the dry season the roads have dried up so more important military operations are possible.

"In the absence of a political solution it is clear that the possibility to look for a military victory is again gaining momentum, and I think that is exactly the period we are facing."