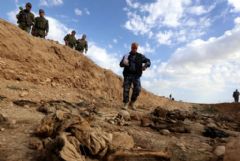 The remains of more than 340 Yazidi Kurds believed to have been executed by Isis terrorists have been found in a mass grave outside Mosul.

The gruesome discovery was made by Iraqi army troops in the ancient city of Nineveh, on the outskirts of Mosul, in northern Iraq.

"The mass grave contains the bodies of 340 people and is located in al-Ba'aj town, which was under control of Isis terrorists," said Iraqi Brigadier General Mohamed al-Shemari.

Iraq has been securing the area after its army and its allies regained Mosul, the country's second largest city, and the surrounding region from Isis in July after eight brutal months of fighting.

The grave, containing men, women and children, is believed to have been made in 2014 after the Islamic terror group took control of the region in June of that year.

The Yazidis are a distinct branch of the Kurdish people who practise their own mystical religion, which believes that God has placed the world under the care of seven angels.

Isis considers Yazidis devil-worshippers, persecuting and killing many members of the sect during the almost two-year period the Islamic fundamentalist group held the region.

According to some estimates, almost 10,000 Yazidis were killed or kidnapped during this period. A number of mass graves containing Yazidi remains have been unearthed in recent months.

The Kurdistan Regional Government in northern Iraq stated that during this purge almost 360,000 Yazidis fled their homes, while another 90,000 left Iraq altogether and took refuge in other countries.

The terror group faced thousands of Iraqi soldiers, Kurdish fighters, Sunni Arab tribesmen and Shia militiamen, who were backed by US-led coalition warplanes and military advisers, who took part in the offensive, which began in October 2016.

Iraq and its allies encountered fierce resistance from Isis, including snipers, suicide bombers and shellfire. When Mosul was finally retaken much of its densely built-up Old City was destroyed as a result of intense fighting.