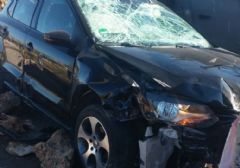 Site of the car ramming attack at Tapuah junction, November 24, 2015

IDF Lt.-Col. Among 4 Injured in Ramming Attack at Tapuah Junction in West Bank

Four people including two IDF soldiers and a Border Police officer were injured in a Palestinian vehicular ramming attack near the Tapuah junction in the West Bank on Tuesday morning, according to Magen David Adom.

One of the soldiers injured hold the rank of Lt.-Col.

Paramedics treated one of the wounded for moderate injuries in the head and stomach. Three other victims were treated for light injuries. They were all evacuated to Rabin Medical Center - Beilinson Campus in Petah Tikvah.

Border police on the scene shot and wounded the 21-year-old Palestinian driver. The driver was considered to be in moderate condition and received treatment on the scene.

A school bus full of children passed through the junction at the time of the attack. The Samaria Regional Council provided psychological treatment for the students and teachers.

The attack on Tuesday morning comes on the heels of a day of violence experienced in the West Bank on Monday.

A Palestinian terrorist on Monday afternoon stabbed to death Israeli soldier Ziv Mizrahi at the Dor Alon gas station along Route 443 in the West Bank, which is a main artery that leads to Jerusalem. Two others were lightly wounded in the attack.

Another soldier at the gas station immediately shot and killed the Palestinian.

Route 443 is a main artery leading to Jerusalem. Mizrahi, who is a resident of the Givat Ze'ev settlement will be buried at 1 p.m. on Tuesday in Jerusalem's Mt. Herzl Military cemetery.

Also on Monday, two teenage Palestinian girls were shot moments after stabbing a 70-year-old Arab man in the head with scissors in the heart of downtown Jerusalem on Monday morning.

A 27-year-old Israeli security guard who came to the Palestinian man's rescue sustained light wounds to his hand when hit by police shooting at the assailants.

The unidentified 70-year old Palestinian man, from Bethlehem, and the unidentified guard were treated at the scene for light wounds by Magen David Adom paramedics before being transferred to an area hospital.

One of the teenage terrorists was declared dead at the scene and the other was listed in critical condition.

Additionally, a vehicle hit a pedestrian and sped off near the West Bank settlement of Homesh on Monday, leading security forces on a manhunt for the suspect.

An 18-year-old man was lightly injured in the hit-and-run event and was evacuated to the Rabin Medical Center-Beilinson Campus in Petah Tikva.

It was not immediately clear if the incident was an accident or a deliberate car ramming attack.