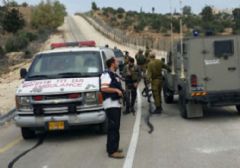 Scene of attack near West Bank town of Bet Awwa‏.

A Palestinian terrorist stabbed and lightly wounded an IDF officer near the West Bank town of Bet Awwa, close to the Green Line and near the southern Israeli district of Lakhish.

Soldiers nearby shot and killed the attacker.

The last security incident in that area occurred on October 10 in the settlement of Neguhot, when an IDF officer tasked with securing the area spotted a Palestinian armed with a knife seeking to infiltrate the community.

He alerted the local armed civilian response team, which shot the terrorist in the leg. The IDF evacuated him to the hospital.