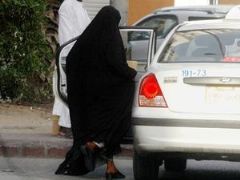 Saudi women can't study, drive or make education decisions for themselves or their children without the permission of a male "guardian".
Source: Top News

In Saudi Arabia, women are confined by technology

Text messages are the ultimate convenience, used by people worldwide to communicate, often to notify friends and families of their whereabouts. In many countries, new technologies can serve to enhance individual liberty. But technology does not always liberate.

Last month, the kingdom of Saudi Arabia expanded a system in which it sends Saudi men text messages, known as SMS, to notify them when their wives or other "dependents" leave the country, as part of its regulations requiring women to obtain permission from their guardians to travel. In a twist that proves technology's power, Manal al-Sharif, the woman who in 2010 launched a campaign to obtain for women the right to drive, used Twitter to inform the world of the story.

In Saudi Arabia, women are treated as legal minors, no matter how old they are. Saudi women can't study, drive or make education decisions for themselves or their children without the permission of a male "guardian" - a father, husband, brother or son. Millions of schoolgirls are barred from playing sports. Unemployment among Saudi women who want to work is 34 percent, and women who have advanced degrees struggle to find employment in the segregated society. Women need a guardian's permission even for some medical treatments.

In recent years, the Saudi government has adopted some initiatives to enhance women's participation in public life. In 2011 Saudi authorities granted women the right to obtain licenses to practice law. Women are now allowed to represent clients in court and to open law firms under their own names. This past summer, the kingdom allowed two women to compete in the London Olympics - the first time female athletes had ever represented Saudi Arabia at the Games.

But the government continues to deny more than half of its people the right to make decisions about the most important aspects of their lives. As long as this system remains in place, women will remain unable to secure an equal role in Saudi society.

The government is broadening the SMS notification program as a technological advance over "yellow slips," the paperwork Saudi women were for years required to present when traveling internationally to prove that their male guardians allowed the trip.

In a 2008 report, "Perpetual Minors," Human Rights Watch told the story of Fatma A., a 40-year-old woman living in Riyadh who could not board a plane without her "yellow slip." After she was divorced, Saudi authorities had transferred her guardianship to her son because her father was dead. "My son is 23 years old and has to come all the way from the Eastern Province to give me permission to leave the country," she said.

In the newspaper Al-Sharq last month, Brigadier Abdullah Abdel Kader described the SMS notification as a technological advance to ease travel. "Saudi Arabia plans to implement more e-services in the future," he said. "Ninety-five percent of people who go through King Fahd Airport now use it. It's a positive thing that people are signing up because the aim of the system is to facilitate the ability of people to exit the country."

The yellow-slip system was both discriminatory and cumbersome. But all the text-message system does is to use modern technology to enforce a retrograde double standard that denies women control over their own travel.

A tiny bright spot in this sad situation is that Internet-based communication is also giving a voice to Saudi women to demand equal treatment. Manal al-Sharif told me this month that "the small fact of the SMS story gives you the idea of the bigger problem with the whole guardianship system."