U.N. Inaction on India
All Actions of the UN Human Rights System Critical of Specific States, 2015 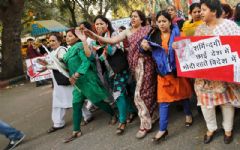 The girls, from the "untouchable" caste, are being punished for their brother's elopement with a married woman.

Two sisters in India will be gang-raped for a social "sin" committed by their brother unless the country's Supreme Court intervenes with protection, according to a report by Amnesty International.

The sisters, one 15 and the other 23, were condemned to this brutal fate by an informal legal system with a history of doling out egregious punishments. Their so-called crime was that their brother eloped with a married woman of a higher caste. The sisters and their family are from the Dalit caste, commonly called Untouchables, which is the lowest in the Indian social hierarchy. On July 30, the village council in the northern Indian district of Baghpat decreed that the two sisters would be raped, then paraded around their village naked, with their faces covered in black paint.

The ruling from this all-male panel is not legally valid, but these unelected panels called khap panchaya controversially act as courts throughout the country and still command power.

The family has already fled the town, seeking refuge in Delhi in May.

Earlier this month, the elder sister petitioned the country's highest court to protect her family, whose home was ransacked. "After we went to the Supreme Court, the villagers are even more aggressive," the sisters' other brother told Amnesty International.

India's Supreme Court previously ruled that the village court's decrees are not legally binding, but that hasn't fully eliminated the system.

The Supreme Court has ordered the province to respond to the protection petition by September 15, but for now the family feels endangered. The father of the young women has also filed complaints-one to the National Human Rights Commission and another to the National Commission for Scheduled Castes-for protection.

A petition released by Amnesty International this week has already garnered nearly 30,000 signatures.

"Revenge rape" as a punishment for a woman or her family member's crimes isn't unheard of in the region. It's traditionally seen as a way to ruin a family's worth, by tarnishing its honor and ruining a daughter's chances for marriage. Last year, a 22-year-old woman was left in critical condition after village elders ordered 13 men to rape her as punishment for her relationship with a man outside the community. The attackers were later arrested by police.

July of last year saw the rape of a 14-year-old whose brother was accused of sexual assaulting a married woman. The woman's husband was ordered to dole out the punishment, and took her into the woods as the village looked on.

The issue has commanded worldwide attention before-notably in a 2002 case in Pakistan, when a victim of this savage "justice" took her attackers to court and was paid restitution. "I tried to commit suicide twice after the incident because I felt like I wasn't getting any justice," she told the BBC last year. "What happened to me is another form of honor killing."