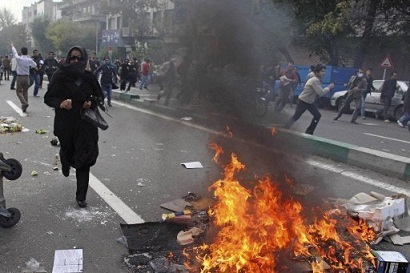 Another 94 unnamed students have also been arrested, mostly in the holy city of Mashhad, the website said.

On December 27, eight people were killed after clashes erupted between security forces and opposition supporters staging fresh protests during the Shiite mourning period of Ashura.

Security forces arrested hundreds of people during the protests, at least 300 of whom are still being held in Tehran, police say.

And government supporters staged counter-demonstrations calling for opposition leaders to be punished.

Rahesabz was one of 60 organisations Iran banned citizens from having contact with, state media reported on Monday. The BBC, Human Rights Watch and US-funded broadcasters are some of the others.

The opposition website said 12 Bahais have been arrested, among them the former secretary of Nobel peace laureate Shirin Ebadi's human rights group. Ebadi's sister was also detained shortly after the opposition's Sunday protest.

Followers of the Bahai faith, founded in Iran in 1863, are regarded as infidels and suffered persecution both before and after the 1979 Islamic revolution.

Dissidents from Iran's Freedom Movement, an outlawed but tolerated group, as well as their relatives and dozens of human rights and student activists, have also been taken into custody, according to Wednesday's report.

President Mahmoud Ahmadinejad, whose disputed June re-election has triggered numerous protests since then, has accused Iran's arch-foes the United States and Israel of staging the latest anti-government protests.

The new wave of arrests came as hardliners stepped up pressure on the opposition. Some hardline senior clerics have even gone as far as declaring protesters as "mohareb" -- enemies of God -- who deserve to be executed.

Mir Hossein Mousavi, whose own nephew was shot dead on Ashura, said he is ready to die for the reform cause in reaction to recent events.

The former premier, who ran against Ahmadinejad, offered a five-point plan in a bid to find a way out of the crisis and called for an end of violence against demonstrators.

He said the government should be held accountable and called for reform of the country's election law, release of prisoners, freedom of the media and a recognition of the right to hold demonstrations as is enshrined in the constitution.

His suggestions have been largely dismissed by hardline figures and media.

Iran rounded up dozens of reformists and journalists backing the opposition shortly after the election as mass street protests broke out in Tehran. Some have been put on trial and sentenced to years in prison.

Dozens of protesters were killed, including three in custody. The administration has also faced allegations of prisoners being raped, which it has vehemently denied.