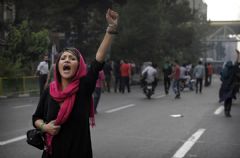 Hundreds of Iranians have defied a ban on protests to mark International Labor Day, with police detaining at least six people.

The semi-official ILNA news agency said the six were arrested outside the gates to parliament on Tuesday, when protesters gathered there and at another location in the capital, Tehran.

The workers who attended the rallies demanded higher wages, better conditions and more protection after retirement.

Iranians took to the streets in December and January to protest against economic hardship and corruption, with some protests escalating into calls for the overthrow of the Islamic Republic. Some 25 people were killed in the unrest and more than 5,000 arrested.

Iran continues to struggle with high unemployment despite the lifting of international sanctions under the 2015 nuclear deal with world powers.