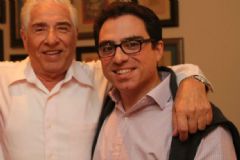 Siamak and Baquer Namazi, now both incarcerated at the same facility in Iran, are pictured in this undated photograph released by their family

Iranian authorities have arrested the elderly father of an Iranian-American dual national held since October 2015, his family said on Wednesday.

Baquer Namazi, an 80-year-old Iranian-American national, had returned to the country this week, prior to his arrest and is being detained at Evin prison in Tehran. His detention comes four months after Iranian authorities detained his son, Siamak, in the same prison. Iran is yet to announce the charges against both men.

Namazi's lawyer, Mahmoud Alizadeh Tabatabei, told the Associated Press that he could not make contact with his client; Iranian authorities said that he would "be informed later" about the case. "It is unlikely that he will be charged," the lawyer added.

Effie Namazi, mother to Siamak and wife to Baquer, announced her husband's arrest in a Facebook post.

"I must share the shocking and sad news that Baquer was arrested in Tehran late evening of February 22, 2016 and, as far as I have been told by those who took him, taken to Evin prison," she wrote. "Now both my innocent son Siamak and my Baquer are in prison for no reason. This is a nightmare I can't describe."

She continued: "I have been trying to find out more information but have been unable to do so and the lawyer also couldn't get any information or get to see him. I am extremely concerned and worried sick for Baquer's health since he is an 80-year-old man and has a serious heart and other conditions which requires him to take special heart and other medicine.

"I pray to God that my Siamak and Baquer return home to me and that they are released. Please keep them in your prayers."

The U.S. State Department said that it would not comment on the arrests because of the sensitivity of the cases but acknowledged them. "We are aware of reports that a U.S. citizen was detained in Iran," Mark Toner, a State Department spokesman, said in a statement released to The New York Times.