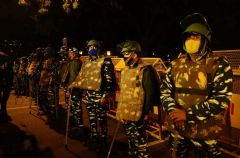 Indian Paramilitary troops stand guard at the site of an low-intensity IED blast near the Israeli embassy in New Delhi, India on January 29, 2021 [Anadolu Agency]

More than a month after an improvised explosive device (IED) went off outside the Israel embassy in Delhi late January, India's central counterterrorism agencies have drawn up a list of suspects, with their investigations concluding that the Iranian Quds force was behind the terror plot but that the bomb was planted by a local Indian Shia module, according to people aware of the developments.

Deliberate false-flag cyber markers were left by the perpetrators, pointing to the role of the Islamic State, but the counterterror agencies are clear that the blast was part of the asymmetric warfare campaign being carried out by Iran's Islamic Revolutionary Guard Corps against Israel, they added. "That the bomb was not of high intensity, with no human targets in mind was perhaps because the Iranians did not want to run afoul of a friendly nation like India. But the message was clear and the threat is real," said a counterterror expert who asked not to be identified and who is now keeping an eye on the Iranian connection and the people associated with it.

A low-intensity device exploded outside the Israel embassy on January 29. Counterterrorism agencies found that the explosive device used was not crude as it appeared to be. Instead, it was a remote-controlled device triggered off by a bomber using line of sight. While the results of the nature of the explosive are still awaited from forensic labs, the agencies feel the device was either an ammonium nitrate-fuel oil explosive with an electric detonator or a more sophisticated PETN (pentaerythritol tetranitrate) device. What they could confirm was that the device contained ammonium powder and had ball bearings, which shattered the windows of three cars parked nearby.

Indian agencies recovered from the spot a letter addressed to Israel's ambassador to India Ron Malka, calling him a terrorist and devil from a terrorist nation. The case is now being investigated by Indian agencies, with the involvement of experts from Israeli spy agency Mossad.

Investigations into the contents of letter - the style of writing and exact spellings of those named - reveal that the missive was written by an Iranian, and possibly handed over by an agent under diplomatic cover, the people quoted above said. The letter swore revenge for Quds Force creator Qassem Soleimani and Abu Mehdhi Al Muhandis, both killed in a US drone attack in January 2020 in Baghdad, and Iranian nuclear physicist Mohsen Fakhrizadeh, who was targeted in a car bomb attack in November 2020.

Both before and in the aftermath of the attack outside the Israel embassy, there were false cyber markers left in Afghanistan so that the main culprits behind the plot could be firewalled, a person aware of the matter said. The agencies said this also shows that the planning was done in great detail with possible reconnaissance runs of the diplomatic target, the person added.

The Israeli ambassador to India has the highest level of protection, with proximate parameter security provided by Mossad agents.

While Indian agencies have taken the attack very seriously, New Delhi is affronted that the Capital is being used by a friendly country to wage a proxy battle and the Modi government will take up the issue with Iran once the local supporters of the Iranian regime are taken into custody.

HT reached out to the Iranian embassy for a comment but there was no response.

After three agents of the Iranian Quds force targeted the wife of the Israeli Defence Attache in India with a magnetic bomb on February 13, 2012 (in Delhi) through an Indian conduit, the Manmohan Singh government not only threatened to expel diplomats but also downgrade the diplomatic relationship with Iran. The Quds Force agents managed to escape out of India at that time.

The ramifications of Iranian involvement in the attack on Israel embassy this time will be very serious as the Modi government has gone out of the way to maintain ties with Tehran despite global pressure. Indian agencies said there will definitely be some action this time.