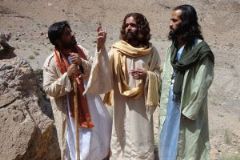 A still from the Iranian "Jesus" film

Activists and Christians are concerned over the whereabouts of three Christian artists detained in Iran, including an actor who played the role of Jesus in an Iranian language film on the life of Jesus Christ.

Shahram Ghaedi, who starred in the Iranian "Jesus" film, and artists Heshmat Shafiei and Emad Haqi were reportedly taken into police custody September 27 in the city of Fooladshahr in Isfahan province.

"Agents of the Iranian regime's Ministry of Intelligence and Security arrested" the three Christian men, said the National Council of Resistance of Iran (NCRI), a broad coalition of opposition groups who want to establish a secular democratic state.

"Agents raided the home of Mr. Sharam Ghaedi [and] confiscated his personal items before detaining him," the NCRI explained in a statement obtained by BosNewsLife Monday, October 6.

"Shahram Ghaedi, an actor, was making a movie about the life of Jesus Christ. There is no information on the whereabouts of the three arrested Christians in Iran," the group added.

Iranian Christians described the three men as "converts", apparently with a Muslim background, and linked the arrests to the men's involvement in the Jesus film.

Ghaedi, 32, is a known theater actor and member of St. Paul Church in Esfahan, Iranian Christians said. The actor reportedly played the role of Jesus in several plays, in part because he was seen as resembling how He may have looked.

Ghaedi wanted to produce a "Jesus" film, but the project was halted after authorities detained several cast members, said Mohabat News, an agency of Iranian Christians and activists.

Some film actors were reportedly forced to leave the country amid pressures from security forces. Ghaedi, a member of Iran's Young Artists Association of Fooladshahr, directed several plays, including "The Last Supper", a Biblical story explaining the last meal of Jesus before His death and eventual resurrection.

The detentions come at a time of worries within Iran's leadership about the spread of Christianity in the strict Islamic state. Church sources claim the country is home to at least 100,000 evangelical Christians.

Iran's new President Hassan Rouhani, who was elected last year, pledged to protect rights of minorities, but critics say Christians and other minorities have been targeted by "the regime". "Christians have been detained and sentenced to long-term imprisonment and exile, many without access to a lawyer or a fair trial," complained the NCRI's Foreign Affairs Committee.

Last month, Iran charged three Iranian Christians for "acting against national security" and "association with the aim to overthrow the system".

Additionally house-churches have been raided and pressured to close down, according to local Christians.

Among those raided are congregations of the evangelical Church of Iran movement, where several pastors and other Christians have been detained.

"President Rouhani's slogan in his presidential campaign was "Prudence of Hope"...In practice his government has proven to be a government of "Threat and Fear" for Christians," commented Mohabat News.