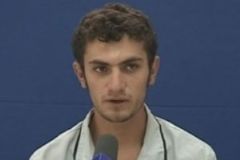 Iran Human Rights, February 20, 2015: The Kurdish political prisoner Saman Naseem who was sentenced to death for offences he allegedely committed at 17 years of age, was executed in the prison of Urmia (Northwest of Iran). Iran Human Rights (IHR) reported earlier that Saman's family were contacted by the authorities yesterday to meet at the prison to collect Saman's belongings on Saturday. According to several independent sources, Saman's family have been asked earlier today to collect Saman's body tomorrow, Saturday 21. February. It is still unclear whether Saman was executed yesterday (Thursday) or today.

Also FIDH (a founding member of the World Coalition Against the Death Penalty) and its Iranian member organisations, the League for the Defence of Human Rights in Iran (LDDHI) and the Defenders of Human Rights Center (DHRC) have strongly condemned "the illegal execution of juvenile offender Saman Naseem that reportedly took place yesterday morning in Iran".

Saman Naseem was transferred together with five death row prisoners of conscience from his prison ward to an unknown location on Wednesday 18. February. There is no information about the other five death row political prisoners: Yunes Aghayan, Habibollah Afshari, Ali Afshari, Sirwan Najavi and Ebrahim Shapouri. There is increasing concern that also these prisoners may be executed soon.

Despite ratifying the United Nations' Convention for the Rights of the Child, Iran is the world's biggest executioner of juvenile offenders. Saman Naseem was sentenced to death in April 2013 by a criminal court in Mahabad, West Azerbaijan Province, for "enmity against God" (moharebeh) and "corruption on earth" ( ifsad fil-arz) because of his membership in the Kurdish armed opposition group PJAK, and for taking part in armed activities against the Revolutionary Guards. His death sentence was upheld by the Supreme Court in December 2013.

Has was 17 year old at the time of his arrest.

According to reports Saman Naseem didn't have access to his lawyer during early investigations and according to a letter he wrote from the prison he was tortured, which included the removal of his finger and toe nails and being hung upside down for several hours.

In the letter, Saman said: " During the first days, the level of torture was so severe that it left me unable to walk. All my body was black and blue. They hung me from my hands and feet for hours. I was blindfolded during the whole period of interrogations and torture, and could not see the interrogation and torture officers."