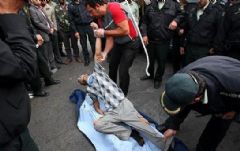 Aftermath of an execution (file photo)

Execution of alleged drug traffickers continue in Iran. More than 50 drug convicts have been executed during the last 10 days. Most of the executions have not been announced by the official sources.

Iran Human Rights, April 22, 2015: Three prisoners were hanged in the prison of Ardebil (Northwestern Iran), reported the Iranian state media. The three prisoners who were not identified by name, were convicted of drug-related charges in three different cases. The charges were: buying and possession of 231 grams of heroin, participation in possession and trafficking of 1400 grams of heroin and possession of about one kilogram of heroin, said the report.

The executions were carried out on Tuesday April 21.