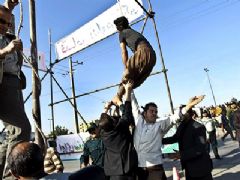 Iran executed two gay men on Sunday for the crime of "perversion" and has sentenced a third individual to death for "insulting the prophet," according to human rights activists tracking the situation.

The head of Iran's judiciary department in the northern city of Rasht announced on Sunday that two homosexual men had been executed for "perversion," which is considered a severe crime under Iran's hardline Islamic law.

The executions come less than two months after Iranian authorities publicly hanged 40 individuals in a two-week period. Iran is executing at least two people a day, according to activists.

Executions in Iran have surged over the past year with well more than 500 being killed for crimes ranging from "waging war against God" to misdemeanor drug charges that would carry minimal penalties in Western countries.

State-sanctioned killings have spiked since the election of Iranian President Hassan Rouhani, who initially vowed to address the issue.

Not much is known about the two men executed over the weekend due to Iranian efforts to sweep such executions under the rug, according to Banafsheh Zand, an Iranian political and human rights activist.

The two men had been held in central prison near Rasht before being killed. The crime of "perversion" is a cover-all under Iran's hardline brand of Sharia law and typically accounts for offenses that are seen as going "against morality," according to Zand.

The Iranian Judiciary also upheld the death sentence for a 34-year-old man who was arrested at his home and charged with "insulting the Prophet."

Rouhollah Tavana was seized by authorities in 2011.

Intelligence officials reportedly "confiscated a private video recording of Tavana on his personal computer, in which while under the influence of alcohol he allegedly uttered a phrase the judge interpreted as insulting the Prophet of Islam," according to the International Campaign for Human Rights in Iran (ICHRI).

"This is an unbelievable act of inquisition at its worst," Ghaemi said in a statement.

"The Iranian Judiciary's insistence on the death sentence calls into question whether these sentences are politically-motivated and intended to confront the wave of international protests against the trend of ever-increasing executions in Iran."

As the Western world negotiates with Iran over its contested nuclear weapons program, human rights activists warn that the country's rising execution rate is being ignored.

While Iran is known to plan and fund terror attacks across the globe, its biggest target is Muslims, Zand said.

"They can't even respect other Muslims," she said. "They're the bigger targets. Their biggest enemies up to now seem to be Muslims because they kill so many."