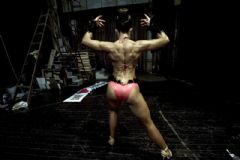 An Iranian bodybuilder has been arrested for publishing revealing photos of herself on social media, the judiciary's news agency reported on Wednesday.

"One of the female bodybuilders who recently published nude photographs on social networks has been arrested," the agency said.

In Iran, "nude" can refer to any woman who is not wearing a headscarf or revealing parts of her body such as arms and legs that must be covered in public.

The unnamed bodybuilder has been sent to prison because she was unable to post bail of two million rials ($50,000, 47,000 euros), the Mizanonline news agency said.

She is thought to be one of two women reported in September to have taken part in an international competition.

Iranian women are allowed to take part in international sporting events, but must respect Islamic rules on clothing at all times.