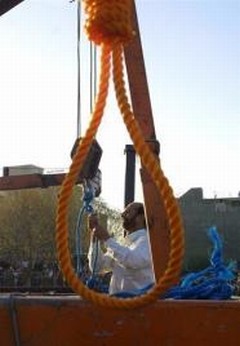 "Iran on Saturday hanged 20 people for drug trafficking at a prison in Karaj, west of the capital, the semi-official Fars news agency reported.

Fars said more than 700 kilos (1,540 pounds) of drugs, including heroin, cocaine and opium, were seized from the 20, who were aged between 35 and 48 and had been arrested over the past five years.

According to human rights group Amnesty International Iran applied the death penalty to 346 people last year, carrying out more executions than any other country apart from China.

But it is rare for such a large number of people to be executed in a single day in the Islamic republic.

Twenty-nine people who had been convicted for various crimes, including murder, rape and drugs trafficking, took place on July 27, 2008 in the largest mass execution in years.

On January 2 last year, 13 people were hanged, including a mother of two young children found guilty of murdering her husband.

The latest hangings bring to at least 161 the number of people executed in the Islamic republic so far this year, according to an AFP count based on news reports. In 2008, Iran executed 246 people, according to that count.

Earlier on Saturday the Etemad newspaper reported that two Iranian men convicted of murder had been hanged in the southern city of Shiraz.

Tehran says the death penalty is a necessary tool for maintaining public security and is only applied after exhaustive judicial proceedings.

Murder, rape, armed robbery, drugs trafficking and adultery are all punishable by death in Iran."