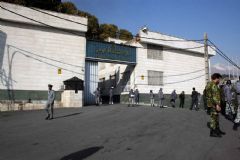 France demanded on Wednesday that Iran release immediately two of its nationals who have been held in prison since June, a situation that is likely to complicate Paris's efforts to defuse tensions between the United States and Tehran.

France's foreign ministry confirmed that Roland Marchal, a senior researcher from Science-Po university, was being detained.

French officials and his family had sought to keep the information secret due the current disputes in the region, fearing it could harm potential negotiations.

Marchal's colleague, Franco-Iranian dual national Fariba Adelkhah, has been in prison in Iran since June.

"We want the Iranian authorities to show transparency in this dossier and act with delay to end the unacceptable situation," Foreign Ministry spokeswoman Agnes von der Muhll said in a briefing.

She added that Marchal had received consular visits and had a lawyer. Iran has refused to offer the same for Adelkhah citing her Iranian nationality and has called France's demands for her release an interference in its internal affairs.

Adelkhah and Marchal were arrested at a time when France and other European powers were caught up in an international standoff over Tehran's 2015 nuclear deal, which the United States abandoned last year.