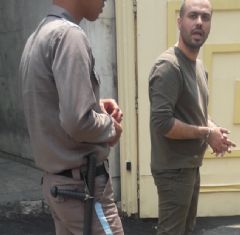 Iran just reached a new low – and no one noticed

Last week the Islamic Republic of Iran reached a new low in its suppression of the press - and almost no one noticed.

It's already widely known that Iran is home to one of the most closed media landscapes on Earth. As the regime faces mounting domestic and foreign challenges, however, it's becoming more cavalier than ever in its attempts to control how news gets covered.

In recent months, more domestic news outlets are closing from a lack of funds. Others have shut down because they have lost their permission to publish. As a result, Twitter and other social media are increasingly where the most critical news-gathering is happening in the country.

So when Masoud Kazemi, an experienced reporter charged with propaganda against the state for tweeting about government corruption, went to court on May 22, he didn't expect anything good. But the reality surpassed even his pessimistic expectations.

Mohammad Moghiseh, the judge in the case, sent Kazemi to Evin Prison, with bail set at more than $70,000 - what it would take him to make as a journalist in 42 years.

But then Moghiseh decided to send a message to the defendant and all other journalists in Iran.

According to a tweet from Kazemi's lawyer, Ali Mojtahedzade, during the court appearance Moghiseh declared his disdain for journalists such as Kazemi.

Mojtahedzade wrote that Moghiseh is known to insult defendants and that in addressing Kazemi he said, "may God damn you. Your mouths should be filled with gunpowder, your tongues should be cut out."

To the shrinking community of critical journalists in Iran, the message is clear: Those in power will do whatever it takes to silence them.

As this regime has done so often in the past when facing serious threats, it's lashing out at Iranian civil society. For years, the front line of that group included the community of human rights activists and lawyers. Most of them, though, are now in prison or living in exile.

That left the local press, a dedicated group that has always faced harsh odds when it comes to making their findings public. Yet they continue to do this work out of a need to inform - even though their numbers are dwindling, too, as the space in which they can operate is quickly shrinking around them.

Just the day before the verdict against Kazemi, the head of the judiciary, Ebrahim Raisi - a cleric who ran as the supreme leader's preferred presidential candidate in the 2017 election and nonetheless lost resoundingly to incumbent President Hassan Rouhani - delivered a speech that clearly outlined how Iran's officialdom views the role that media should play in Iranian society. Spoiler alert: It sounded like a bad imitation of George Orwell.

"Media is responsible for monitoring the enemy as it prepares its attacks on us, and journalists must be careful not to publish or spread any ideas or signals that would make the enemy happy," Raisi told a gathering of regime-supported newsroom executives. "You in the media should explain the actions and the views of the government and the establishment, but also must avert efforts by the enemy to create despair and instead create hope in the society. We should publish content that restores the public's trust in the system."

Yet Rouhani and his allies are contributing to the problem despite their continued promises to cultivate freer expression. According to sources in Iran, they have begun to try to rein in reform-minded journalists, encouraging them to be less critical in their reporting - ostensibly as a way to keep them out of trouble.

Raisi's speech can be interpreted as a message from the entire political order to journalists. "We believe that you should work in a way that the red lines set by law to preserve freedom are observed, because preserving the freedom of media and newspaper requires maintaining those red lines," Raisi said, without a hint of irony.

Journalists working in Tehran tell me that the state, supported by Rouhani and his administration, is planning to impose even tighter control on the media by mandating that all journalists have to be licensed before they can enter the field. Permission is already required to work in media, but this would go above and beyond and would be sure to prevent those with critical views from even getting a start.

Such a move would bring the already absurd Ministry of Culture and Islamic Guidance - which oversees all media activity, acting as censor when needed - even closer in line with Orwell's vision of the Ministry of Truth.