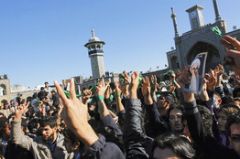 New laws on these cafes are seen as a bid to head off protests like those in 2009.
Source: WSJ

Iran is mounting new clampdowns on Internet expression, including rules that will impose layers of surveillance in the country's popular Internet cafes, as Tehran's political establishment comes under increasing strains from economic turmoil and threats of more international sanctions.

Until now, Iran's cybercafes have been a youth-culture mainstay of most towns and neighborhoods, used not only by activists but also by other Iranians who believe the security of their home computers is already compromised.

Iranian users also have reported more blocked sites this week, as well as new barriers to accessing social-networking services. Internet connections, too, have bogged down. The network slowdown likely heralds the arrival of an initiative Iran has been readying-a "halal" domestic intranet that it has said will insulate its citizens from Western ideology and un-Islamic culture, and eventually replace the Internet. This week's slowdown came amid tests of the Iranian intranet, according to domestic media reports that cited a spokesman for a union of computer-systems firms. He said the intranet is set to go live within a few weeks.

Taken together, the moves represent Iran's boldest attempts to control flows of online information-a persistent thorn in the side of Tehran's political establishment since activists used the Internet to plan and document mass protests against what they said was a rigged election that returned President Mahmoud Ahmadinejad to office in 2009.

The video surveillance brings Iran further into the vanguard of nations that have sought to keep tabs on Internet use. Libya under Moammar Gadhafi ran extensive web-monitoring operations. China has sophisticated website filtering and an army of censors patrolling chat rooms. China and Cuba require Internet-cafe users to present identification.

New laws on these cafes are seen as a bid to head off protests like those in 2009.

Tehran is imposing the crackdown amid a politically fraught run-up to Iran's March 2 parliamentary elections. Reformist political parties have already boycotted the vote. Meanwhile, Iran faces deepening economic pressures. International sanctions have crimped foreign sales and investments, inflation has been steep and the currency has dropped 40% against the U.S. dollar since late December.

The rial's record lows have come in part as the European Union and U.S. have threatened to place sanctions on Iran's central bank and impose an embargo on Iranian crude for what they allege is Iran's pursuit of nuclear weapons, a charge Tehran denies. A recent rhetorical battle between Iranian and U.S. military officials about access to waters of the Persian Gulf-through which one-fifth of the world's oil passes daily-raised fears of a possible military confrontation.

With the latest moves, the government is aiming to sow fear ahead of elections and curtail planned protests, say activists and observers in Iran and abroad. The Iranian judiciary announced last week that any calls to boycott elections, delivered on social-networking sites or by email, would be considered crimes against national security.

"They want to execute a plan where no one has protection, so they can trace whoever is involved in what they perceive as antigovernment activity at any given moment and at any location," said Ehsan Norouzi, an Iranian cybersecurity expert who left Iran after 2009 and now lives in Germany. Tehran hasn't directly commented on the measures. The Islamic Republic, however, has long battled the Internet's influence and tried to filter access to sites, such as pornography or even fashion, that didn't fit within the norms of a conservative Islamic society. Since 2009, Iranian officials have widened their Internet monitoring to fight what they say is a "soft war" of culture and ideology against it, That year they formed the Cyber Police, a task force drawn from various security arms, which the government says has trained some 250,000 members.

In the past week, Iranian Internet users say the government has blocked access to VPNs-secure Internet networks that are located abroad-and foiled one of the ways users have attempted to gain entry to closed websites such as Facebook, Twitter and YouTube. In recent weeks the government also has targeted a popular currency-tracking site and pages belonging to prominent politicians, among others.

"They are closing in on us, and we are already feeling the dire impact of these announcements. Everyone is afraid," a prominent student activist said in an email exchange from Iran. "It will make it very difficult for us to tell the world what's happening here."

The new rules on cybercafes, issued by the Cyber Police and published Wednesday in several Iranian newspapers, require customers at the cafes to provide their name, father's name, address, telephone and national identification numbers before logging on. The venues must install security cameras that will let the government match users to the computer they used. They also must log each user's browsing history, including the IP addresses of every Internet page visited. This data, along with the video images, must be saved for six months and provided to the Cyber Police on demand, according to the regulation. "These rules are aimed at promoting transparency and organization for Internet businesses and offer more protection against online abuse," according to the text of the regulation. Internet cafe owners in Tehran expressed anger at the rules, saying they would cause customers to shun their establishments, forcing them to close. "Do they think I'm running a security shop, to ask people for their ID number and put a guard above their head to monitor their Web activity? Are they insane?" the owner of a well-known Tehran Internet cafe said by telephone. Separately, Iran's government appears to have enlisted an army of users to promote it on the Internet.

A conservative cleric blogger based in the holy Shiite city of Qum, Ahmad Najimi, said in his blog last week that the government was paying hackers hired in the network known as the "Cyber Army" the equivalent of $7 per hour to swarm the Web with positive comments about the Islamic Republic and post negative comments against dissidents.

That is consistent with comments from the Revolutionary Guards Corps' commander in Tehran, General Hossein Hamedani, who in October announced the creation of two Cyber War centers in the capital. Gen. Hamedani said some 2,000 bloggers had been recruited and trained as Cyber Army staff. "In the soft war against Iran, there is an opportunity for everyone to be present and we have to be ready for widespread counterattacks," Mr. Hamedani said, according to the semi-official Fars News Agency.

Iran announced in March 2011 that it was funding a multimillion-dollar project to build an Iranian intranet-a necessity, its telecommunications ministry said, to offer Iranians an alternative to the un-Islamic and corrupt content on the World Wide Web. An economic affairs official called it "a genuinely halal network, aimed at Muslims on an ethical and moral level." An Iranian newspaper this week cited Payam Karbasi, the spokesman for Corporate Computer Systems of Iran, a professional union, as saying the network would be launched in coming weeks.

But eventually, officials have said, the entire country-which the government estimates has some 23 million Internet users-would switch over. But many experts are skeptical that Iran could pull off such a project, saying the economy would suffer if its commercial entities are closed off.