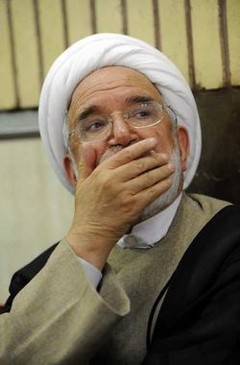 Iranian officials interviewed an alleged victim of jailhouse rape at the hands of security personnel. But instead of consoling him, they asked him embarrassing questions and blamed him for the violence.

They said it was the young man's own fault for protesting the results of Iran's June 12 presidential elections, according to a fresh account of the alleged rape published on the website of a prominent reformist politician.

"I asked them why I and others were raped in prison," the young man says he asked two interrogators and a judge who had agreed to hear his story, according to the website of former parliamentary speaker Mehdi Karroubi.

One of the three replied, "'When the supreme leader confirmed the election result, everyone should have recognized it."

The young man's tale of rape, the latest in a series of gruesome stories emerging from Iran's detention centers, was published today on the website of Karroubi's political party, Etemad Melli. (The website is in Arabic.)

The young man said he was raped by guards after being locked up in Tehran's now notorious Kahrizak detention center.

He said he was at first humiliated by the experience and suicidal, but was consoled by Karroubi, a cleric, who helped him regain his composure and self-esteem.

"He devoted himself like a psychiatrist to me to convince me that I was innocent," he said, according to the account. "He cited religious examples, and I was finally convinced that when someone is raped with his hands and feet tied is not a sinner and is on the contrary an oppressed."

On July 24, the alleged victim met with an official at the chief prosecutor's office, whom he described as respectful and sympathetic.

About four weeks later, the judge and two interrogators began cross-examining him, asking him to write down everything that had happened. They asked him embarrassing questions about the extent of penetration, and whether he enjoyed being raped.

But he said they appeared less interested in who the perpetrators were than why he went to Karroubi for help.