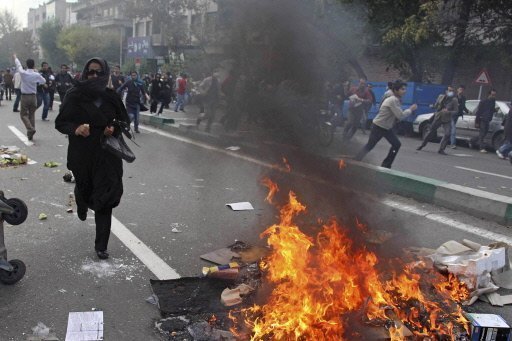 Post-election protests have been quashed with force by authorities.
Source: AP

If confirmed, it would be the first official sign that jailed protesters faced severe abuse, as alleged by some leaders of the opposition movement.

The man, Mohsen Ruholamini, 25, was the son of a campaign adviser to defeated conservative candidate Mohsen Rezaie.

Correspondents say the conservative supporting Mehr news agency has previously been used by critics of the re-elected President, Mahmoud Ahmadinejad, to leak information.

It is owned by the Islamic Propagation Organisation, which although an independent legal entity, in practice works in parallel with the Ministry of Culture and Islamic Guidance.

Mehr says that last month a state forensic doctor ruled out meningitis as the cause of Ruhalamini's death in a report handed to judicial authorities.

In fact, he died of "physical stress, the effects of being held in bad conditions, multiple blows and severe injuries to the body", the doctor is quoted as saying.

On Sunday, Iran's Supreme Leader Ayatollah Ali Khamenei promised Abdolhossein Ruholamini, the young man's father, that justice would be done in the case.

The recently appointed judiciary chief, Ayatollah Sadeq Larijani - brother of Mr Ahmadinejad's main conservative rival - has set up a three-member panel to look into post-election unrest, including the alleged abuse of detained protesters.

Police chief Esmail Ahmadi Moghaddam had originally said some protesters had died from a viral disease at Kahrizak jail - where Ruholamini was held - which has since been closed down.

Reformist leader and defeated candidate Mehdi Karroubi has claimed detained protesters had been subjected to beatings, torture and rape in jail.

"Some youngsters who were chanting slogans were beaten in such a way that they lost their lives," he alleged.

Mr Ahmadinejad's re-election was followed by massive street protests over alleged vote-rigging, in which at least 30 protesters were killed in clashes and thousands were arrested.

Most of those detained have been released, but about 200 remain behind bars and some 110 have been put on trial.

On Friday Mr Ahmadinejad called for decisive action to deal with leaders of the protests which he said were organised, provoked and implemented on behalf of "the enemy".