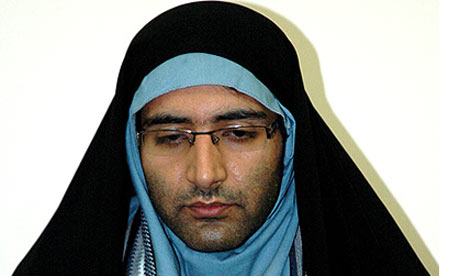 The images are incongruous and unconvincing: a young man with heavy stubble looks shame-faced while forced to pose wearing Islamic chador and maghnaeh, the female headscarf.

The images were published by Iran's state-run media in an attempt to humiliate one of the theocratic regime's harshest critics, Majid Tavakoli, a student activist arrested last Monday in the latest demonstrations against the disputed re-election of President Mahmoud Ahmadinejad.

Now the pictures have provoked an angry backlash from Ahmadinejad's opponents who claim they display his government's vindictiveness and contempt for women.

The semi-official Fars news agency reported that Tavakoli was arrested while trying to escape dressed as a woman after giving a speech at Tehran's Amir Kabir University. It posted his photo beside an image of the former Iranian president, Abolhassan Bani-Sadr, who reportedly fled the country in female disguise after falling from official favour in 1981.

But far from discrediting Tavakoli, the move appears to have backfired by boosting his standing in the opposition movement.

A campaign on Facebook has seen more than 80 men expressing solidarity by posting pictures of themselves wearing hijabs and chadors. Similar displays of support have surfaced on Twitter.

But the most daring mockery of the regime has appeared on a spoof website, gordab.com, which depicts faked images of Iran's supreme leader, Ayatollah Ali Khamenei, wearing female dress.

Tavakoli was arrested after travelling to Tehran from Bandar Abbas to attend last Monday's student-day demonstrations, which were marked by clashes between activists and security forces. He has spent two previous spells in jail and was among a group of students arrested and allegedly tortured in 2007 following a demonstration that disrupted a visit by Ahmadinejad to Amir Kabir University the previous year. Human rights groups say he was beaten and tortured after his latest arrest.