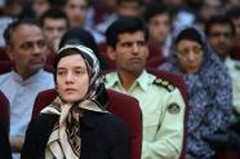 The mass trial in Tehran's hardline Revolutionary Court demonstrates the government's resolve to discredit the reform movement in one blow and bring an end to anti-government protests that have persisted since the June 12 election. This is the second day of an extraordinary mass trial that started a week ago, although those standing trial Saturday were not the same defendants who attended the court last week.

Saturday's session saw new faces including several prominent reformist politicians as well a 23-year old French academic arrested in July. According to Iran's official news agency, IRNA, a local female staff member of the French Embassy in Tehran is also one of the defendants.

During the session, a prosecutor read out an indictment outlining what he said was plans by the U.S. and Britain to foment unrest in Iran with the aim of toppling the ruling Islamic system through a "soft overthrow", the official IRNA news agency reported.

The vague indictment also accused the two powers of providing financial assistance to Iran's reformists to undermine hard-line clerics within the ruling system.

Hundreds of thousands of Iranians marched in days of street protests after the election, denouncing official results that declared President Mahmoud Ahmadinejad the winner. Iran has tried to portray the protests following the vote as being led and encouraged by foreign powers, not fueled by internal dissent. Among those standing trial is Clotilde Reiss, a 23-year-old French lecturer who was reportedly arrested at Tehran airport on July 1. Senior European Union diplomats have called on Iran to immediately release Reiss, who was jailed on charges of spying linked to riots over last month's presidential election. France has called the charges "baseless."

Pictures on Iran's English-language Press-TV showed a large room with rows of people and pictures of the Ayatollah Ruhollah Khomenei, the late Iranian revolutionary patriarch who overthrew the pro-Western Shah in 1979 and established an anti-American Islamic republic as well as his successor, Ayatollah Ali Khamenei. Iran's reformist and moderate parties have denounced the mass trial, describing is a "ridiculous show." The first session held last Saturday featured confessions from some of the defendants, confessions that many human rights groups say were obtained under duress. One of the most high-profile defendants during the first session was former Vice President Mohammad Ali Abtahi, who served under former reformist President Mohammad Khatami. Khatami is a strong ally of the man who says he was the rightful winner of the June election, Mir Hossein Mousavi.

Among the others on trial last week were two foreign citizens - Iranian-American scholar Kian Tajbakhsh and Newsweek reporter Maziar Bahari, who holds Iranian and Canadian citizenship. Bahari was quoted by Iranian news agencies as saying in the trial that Western media had attempted to guide events in Iran following the election.

Newsweek issued a statement that Bahari's work has "always been balanced and objective" with "fairness evident throughout his decade-long career."

Such a mass trial is unprecedented in Iran. Smaller-scale mass trials were held following the 1979 Iranian Revolution but those were usually held in secret.