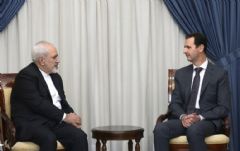 Iran is working with the Syrian regime to clear hundreds of thousands of Sunni Muslim residents from Damascus in an effort to alter the demographic makeup of the city, according to the London-based Al-Quds Al-Arabi newspaper.

According to the report, the overwhelmingly Shiite Iran is helping the regime to raze homes in the relatively plush Mezzeh neighborhood of Damascus, pushing out the Sunni residents in an effort to cement local support for the regime.

Hundreds of families living in the area were given just a few hours to evacuate their homes, the report said.

The Christian Science Monitor reported this week that Iran had also been seeking to include a population transfer in a recent ceasefire in the Syrian town of Zabadani, close to the Lebanese border.

The deal would have seen the transfer of Zabadani's Sunni population to rebel-held areas in exchange for Shiites from the towns of Foua and Kafraya, who would have been brought to regime-controlled areas around Damascus. Both Foua and Kafraya are pro-government Shiite enclaves in the predominantly pro-rebel Idlib province. Local sources said Saturday that a ceasefire in the area had broken down and both sides had resumed shelling.

The report said that Iran and the Assad regime are seeking population transfers in order to strengthen the government's control over key areas linking the Syrian capital with the Mediterranean coast, the heartland of the Alawite community, the Shiite sect to which President Bashar Assad belongs.

Assad has been battling rebels seeking for oust him for more than four years, in a bloody civil conflict that has created more than 3.5 million refugees, and left at least 220,000 dead, according to the UN.