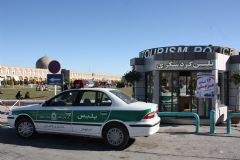 The Islamic Republic of Iran has sentenced a 21-year-old Christian woman to 90 days in prison and a public flogging for "disturbing public order," after she criticized the Iranian military for shooting down a Ukrainian passenger jet.

Christian convert and human rights activist Mary (Fatemeh) Mohammadi has received a suspended sentence of three months and one day in prison as well as ten lashes for "disturbing public order," reported the UK-based All Party Parliamentary Group for International Freedom of Religion or Belief (APPG).

Irani security arrested Mary Mohammadi on January 12 near the site of a protest demonstration against the downing of Ukrainian Airline passenger Flight 752 by the Revolutionary Guard.

APPG said that Ms. Mohammadi was "physically and emotionally abused during her arrest and transfer to Qarchak prison" and that according to the woman, the judge questioned her about her faith, even though this had no bearing on the charges.

There was "no evidence against me, so I ought to have been acquitted, but instead I was sentenced not only to imprisonment, but also flogging," Mohammadi said.

"And of course, even before the verdict was handed down, I was forced to endure all kinds of torture, none of which is sanctioned by law, and which ought to be considered crimes in themselves," she said.

The U. S. Commission on International Religious Freedom (USCIRF), an independent government organization, publicly denounced the decision on Wednesday.

No peaceful activist should be targeted on the basis of their religious beliefs," the commission declared on Twitter.

According to International Christian Concern (ICC), after her arrest in January Mary disappeared for nearly a month before she was discovered in Qarchak Women's Prison, a jail notorious for its abuse of prisoners.

"While there, Mary reported that she was beaten and suffered other kinds of mistreatment at the hands of the officials, including being strip-searched twice," ICC reported. "She was eventually released on a bail of 30 million tomans ($2,250 USD) and charged with 'disrupting public order by participating in an illegal rally.'"

Tehran faced intense international criticism after shooting down the Ukrainian airliner, which killed all 176 passengers and crew aboard the plane.