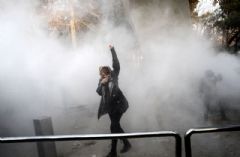 An Iranian woman raises her fist in a cloud of tear gas during a protest at the University of Tehran on December 30, 2017

Iran student gets 7 years for taking part in protest

A 21-year-old student in Iran has been sentenced to seven years in prison for taking part in university protests, her lawyer and Iranian media said on Monday.

Parisa Rafei, an arts student at the University of Tehran, was convicted of "assembly with the intention of acting against national security, propaganda against the system and disrupting public order", according to reformist newspaper Shargh.

Her lawyer, Saeed Khalili, described the sentencing as "unfair and unreasonable" on Twitter. He was also quoted by Shargh as saying: "In my view, none of these charges are logical or a legally sufficient reason to indicate that she has committed a crime."

Khalili said the alleged crimes were focused on a student union demonstration in early December over issues such as dormitory opening hours.

"All these actions are within the framework of law and rights stated in the constitution," Khalili added.

A total of 45 of her fellow students are also behind bars for their part in much broader unrest that swept the country later in December, according to an article in the reformist Etemad newspaper.

It said at least two of the students have been given sentences of eight years, without providing details, and that all the cases were due to be completed within the next month.