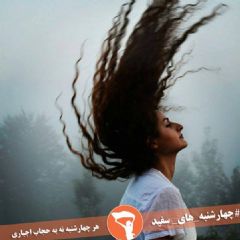 The profile picture of the Iranian dissident Facebook page

Iranian revolutionary court officials proclaimed Monday that women who send images of themselves not wearing a headscarf to a dissident social media page would face up to ten years of imprisonment.

"Today, head of the revolutionary court in Iran reported that women who send me videos risk 1 to 10 years of jail," exiled activist and journalist Masih Alinejad posted on the page My stealthy freedom. "My Response: the regime isn't scared of me. They're scared of people & their demands. I'll keep relaying the voices of people as long as I keep receiving videos."

Alinejad, 42, started the Facebook page in 2014 to protest against the Iranian law that forces women to cover their hair with a hijab.

Born in a modest and conservative family in the Iranian countryside, she was first arrested at the age of 18 for her writings criticizing the Islamic Republic.

An exposÃ© on corruption in the Iranian Parliament was among the stories that she covered as a professional journalist. She left the country in 2009 after escaping arrest once again. Her memoir "The Wind in my Hair â My Fight for Freedom in Modern Iran" was published in English in 2018.

"My stealthy freedom" describes itself as a non-political page.

"The initiative reflects the concerns of Iranian women, who face legal and social restrictions," reads the description.

"All of the photos and captions posted have been sent by women from all over Iran and this is a site dedicated to Iranian women inside the country who want to share their 'stealthily' taken photos without the veil," it adds.

However, Tehran authorities accused Alinejad to be in the pay of the US government.

"As Masih Alinejad has a contract with the Americans, all those women who send the video footage of removing their hijab to her will be sentenced between one to 10 years of jail according to the article 508 of the Islamic Criminal Justice Act," the head of Tehran's Court of Revolution cleric Mousa Ghazanfarabadi told Fars news, as reported by The Telegraph.

"My understanding of the law is that three types of video recordings are criminal acts; to film our military installations; to record private life of another citizen and the third case is to record a film with the aim of working with an enemy government," he added, when asked if sending clips to an individual in US amounts to a criminal act.

Earlier this year, Alinejad met with US State Secretary Mike Pompeo, who thanked her for her courage and her battles. At the same time, on her personal website, she points out how "following Donald Trump's notorious immigration ban," she found herself separated from her child, who lives abroad. The latest videos published in "My stealthy freedom" include footage showing a policeman seizing a motorcycle from a woman (in Iran women are not allowed to ride motorcycles), and passersby harassing women on the street for not wearing a hijab.

"When the chief of the revolutionary court states that I'm part of a 'hostile state,' our answer is clear: No government has been more hostile to Iranian people than its present government," Alinejad said in a video. "Forty years ago, Iran belonged to all Iranians, Christian, Muslim, Jewish, Zoroastrian, Bahai, believers or non-believers. But based on the rules of the regime, Iran is only home to those who comply with Islamic dress," she added.

"You have taken a nation hostage, and you are our enemy," she further noted.