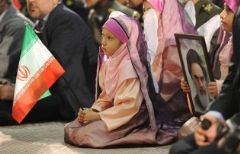 Lawmakers in Iran have defeated a bid to outlaw the marrying of girls aged nine to 13, just days after the findings of a new global report indicate, once again, that women fare worse in Islamic countries.

A female lawmaker described as a reformist expressed regret at the decision, which was taken by the parliamentary committee dealing with legal and judicial affairs, saying forcing children to marry young was akin to "killing them."

"We intended to allow little girls to enjoy their childhood but unfortunately the motion failed," the ISNA news agency quoted Tayebeh Siavashi as saying.

Currently, girls in Iran may be legally married at 13 although those as young as nine may be married with the permission of their fathers or a court.

The rejected motion had aimed to lift the legal marriage age to 16, and to enable marriage between 13 and 16 only with the approval of a legal guardian.

Siavashi was quoted as saying that between 30,000 and 40,000 Iranian girls are married under the age of 13, and some 300 at even younger than nine years of age.

The chairman of the committee, Allahyar Malekshahi, said feedback had been received from legal and medical specialists, as well as experts in Islamic law, the teachings of the Qur'an and the Hadiths, or traditions of Mohammed.

Islam's 7th century prophet consummated his marriage to Aisha, the youngest of his dozen wives and concubines, at the age of nine, according to an authoritative Hadith. They had married when the child was six.

(Last October, Europe's premier human rights court ruled that remarks about Mohammed acting as a pedophile were are not covered by the right to freedom of expression, agreeing with a court in E.U. member-state Austria that they constituted "an abusive attack on the Prophet of Islam which could stir up prejudice and threaten religious peace.")

According to 2018 UNICEF data. 17 percent of Iranian girls are married younger than 18. The equivalent figure for the U.S. is 0.46 percent, according to the Pew Research Center.

Child marriage is just one area where the treatment of women in Iran has prompted concern.

A 2017 U.N. report referred to official discrimination against Iranian women including underrepresentation in decision-making positions and the labor force, harassment of women's rights campaigners, and unequal treatment relating to divorce, child custody, attire, and freedom of movement.

Other U.N. reports have also noted that under Iran's Islamic penal code, "a woman's testimony in a court of law is regarded as half that of a man's" and that abuses of female prisoners include forced marriages, sexual violence and torture, and the rape of virgins awaiting execution.

Early this year dozens of women in Iran were arrested for removing their hijabs in public as a protest against the enforced dress code, and some were later convicted and imprisoned.

Iran is currently an elected member of two of the top U.N. agencies for women's empowerment, the 45-member Commission on the Status of Women, and the 41-member executive board of the agency known as U.N. Women.

The World Economic Forum's 2018 "Global Gender Gap" report assesses differences between men and women in 149 countries, in the areas of political empowerment, economic participation and opportunity, educational attainment, and health and survival.

The latest version of the comprehensive survey, released last week, is topped by the Nordic countries, with Iceland, Norway and Sweden in the top three placings.

The bottom end of the rankings is dominated by Islamic nations.

Of the bottom 30 countries in the rankings â positions 120 to 149 â all but four are members of the Organization of Islamic Cooperation (OIC) bloc. The exceptions are the Democratic Republic of Congo (144th place), Angola (125), Timor Leste (124) and Bhutan (122).

Of those 30 countries where women are treated worst, seven are members of the U.N. Women board this year: Yemen, Pakistan, Iran, Burkina Faso, Nigeria, Bahrain and United Arab Emirates.

Iran and Pakistan end their stint at the end of this month, but on next year's U.N. Women executive board their places will be taken by two other countries also on the bottom 30 of the WEF report â Angola and Saudi Arabia.

U.N. Women's full name is the U.N. Entity for Gender Equality and the Empowerment of Women. Another top U.N. women's body, the Commission on the Status of Women (CSW), also has its share of countries in the bottom-ranking 30 on the Global Gender Gap report: Iran, Iraq, Bahrain, Kuwait, Qatar, Saudi Arabia, Algeria and Nigeria.

The CSW's main focus in gender equality and the empowerment of women.

A third U.N. women's body, the Committee on Elimination of Discrimination Against Women (CEDAW), comprises 23 independent experts who monitor countries' compliance with a 1979 U.N. Convention.

Current members include five from the lowest-scoring 30 countries on the WEF list: Algeria, Egypt, Lebanon, Nigeria and Mauritania.