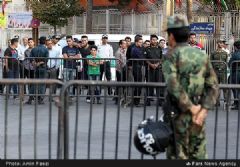 The execution wave continues in Iran. According to the official and unofficial reports, in the last 30 days at least 95 people have been executed in different Iranian cities. This is an average of more than 3 executions everyday. Iran Human Rights urges the international community to condemn the execution wave in Iran.

According to the Young Journalists Club (YJC), a news website close to the Iranian security forces, four of the men were hanged in the "Azadi (Liberty) Square" of Shiraz. These men were identified as: "Bahram", "Edalat" and "Mohammad" charged with kidnapping and rape, and "Jahanbakhsh B." charged with "corruption on the earth" and armed robbery.

One man identified as "Hossein Sh." was hanged publicly in Sardasht. He was charged with "Corruption on earth" and armed robbery, said the report.

Pictures of the public executions in Shiraz shows children watching the executions.