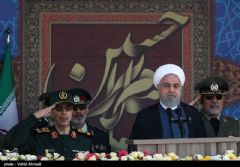 The Islamic Republic of Iran on Sunday imposed a sentence of 80 lashes on Zaman Fadaee, an Iranian Christian, for drinking Communion wine.

According to Article 18, a religious freedom website, "Zaman Fadaee, who prefers to be called Saheb, received 80 lashes."

Ellie Cohanim, the US assistant special envoy to monitor and combat antisemitism at the State Department, told The Jerusalem Post: "The Iranian Regime has consistently trampled on the human rights of the people of Iran. The United States stand with the people of Iran in their quest for religious freedom and all other basic human rights."

"For over four decades, the Islamic Republic of Iran has flogged, tortured and executed innocent souls for their religious beliefs and so much else. In this and other ways, this regime behaves no differently from ISIS. Yet the free world condemns in unison the actions of those radical Islamists but tolerates and even normalizes [Iran's Supreme Leader Ayatollah Ali] Khamenei's cabal," Mariam Memarsadeghi, an Iranian-American expert on human rights, told The Jerusalem Post.

Article18 reported that Saheb, who is converted from Islam to Christianity, suffered injuries during the flogging.

"It is illegal for Muslims to drink alcohol, but there are exemptions for recognized religious minorities, including Christians. However, converts like Youhan and Saheb are not recognized as Christians," the website wrote.

US State Department spokeswoman Morgan Ortagus tweeted at the time: "Deeply disturbed by reports Iran lashed Mohammad Reza Omidi 80 times for drinking communion wine. He already served two years in prison for belonging to a house church. We condemn these unjust punishments and urge Iran to allow all Iranians the freedom to practice their beliefs."

Sheina Vojoudi, an Iranian dissident who fled the republic, told the Post that "What I know from my experience is that it's all an excuse to make people afraid and prevent the huge wave of converting to Christianity. When I converted to Christianity, I attended the Armenian church in Tehran secretly, where it is forbidden for the Persian speakers. There must be no preaching and no Bible in Persian."

She continued, "to have the Bibles in Persian, people risk their lives at the airport to bring Persian Bibles from Armenia. Evangelism in Iran is recognized as an act of espionage. What really concerns me is that I don't know what happened to my teachers. We were always in contact, we met secretly. They taught me the first steps of Christianity and out of sudden both of them disappeared."

Karmel Melamed, an Iranian-American journalist and activist for religious minorities in Iran, told Post that "It's shameful that the leaders of Europe and especially the Vatican, which claims to be the world's protector of Christians, have been silent about the Iranian Islamic regime's 41-year persecution of Christians and Christian converts in Iran."

He added that "It seems as if economic interests are more important for Europe that does extensive business with Iran's ayatollahs rather than speaking out against their regime's horrific human rights abuses against religious minorities in Iran."