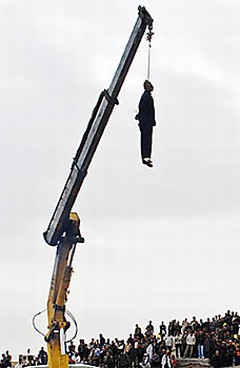 A man is executed by hanging in Iran. (file photo)

"An Iranian court has sentenced a 22-year-old man to death for violating the Islamic Republic's ban on drinking alcohol several times, a news agency said this week.

Under Iran's Islamic sharia law, a person who is caught drinking for a fourth time and confesses faces possible capital punishment, even though legal experts say executions for this offence are very rare.

"My client had been drinking at home for a fourth time and he made some disturbance in the street and police arrested him," his lawyer, Aziz Nokandei, told the ISNA news agency.

Nokandei said his client, identified only with his first name Mohsen, had confessed and expressed remorse. He can appeal against the verdict within 20 days under Iranian law and the head of the judiciary can also intervene.

Iran has stepped up the number of executions in the country since the authorities launched a clampdown on "immoral behaviour" in July, arresting scores of accused drug smugglers, murderers, rapists and other criminals.

European governments and Western rights groups have criticised Iran for the executions, usually carried out by hanging. Iran has dismissed the criticism and accused the West of double standards.

Last week, Iran's judiciary chief ordered a halt to public executions in Iran unless they have his approval.

While those sentenced to death would still be hanged behind prison walls, the move by Ayatollah Mahmoud Hashemi-Shahroudi appeared designed to lower the public profile of Iran's increasing number of executions.

Rights group Amnesty International says Iran has one of the highest rates of executions in the world."