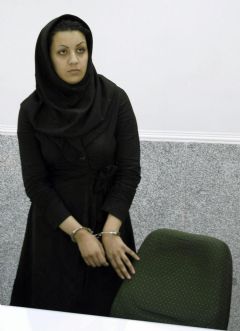 An Iranian rape victim is set to be hanged unless she agrees to apologize to her attacker's family for making the claim of sexual assault.

Interior designer Reyhaneh Jabbari killed Moreteza Abdolai Sarbandi after he lured her to a flat on the pretense of work, but then attacked her.

Sarbandi, an Iranian intelligence agent, had apparently offered to hire Jabbari to redesign his office and took her to an apartment where he abused her, reports The Telegraph.

Jabbari, 26, claims the killing was an act of self-defense. She stabbed him after the assault.

She was convicted of his murder at a subsequent trial after confessing, which many claim was extracted under intense pressure, and sentenced to hanging.

But Sarbandi's family claims she is lying about her version of events, reports The Telegraph.

Under Iranian law, the family of victims is to grant clemency in capital punishment cases.

However, Sarbandi's son, Jalal, has demanded she change her version of events if she wants to live.

"Only when her true intentions are exposed and she tells the truth about her accomplice and what really went down will we be prepared to grant mercy," he was reported as saying by The Telegraph.

The son says there was another man in the apartment at the time of his father's death and that Jabbari had sent a text to her boyfriend saying she would kill Sarbandi.

The hanging could take place within weeks.