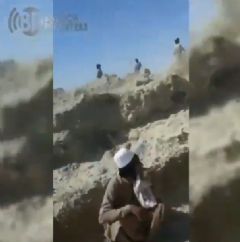 A screenshot from a video taken as Iranians take cover and flee gunfire from Iranian regime forces.

Protesters occupied government offices on Tuesday in the Iranian city of Saravan â the capital of Saravan County in the Sistan and Baluchestan province â over the killing of fuel traders on the border of Pakistan and the Islamic Republic.

The shooting at the Pakistan-Iran border resulted in at least ten dead and six injured. The Jerusalem Post verified video footage on Twitter that shows Iranians in Saravan protesting against the regime. The Islamic republic shut down the Internet in the region due to the revolt.

According to US government news outlet Radio Farda, "Citizens and security forces have clashed in Iran's southeastern Sistan-Baluchistan Province, a day after the Islamic Revolutionary Guards Corps (IRGC) opened fire on fuel smugglers, killing as many as 10 of them." The US government classifies the IRGC as a terrorist organization.

Sheina Vojoudi, an Iranian dissident who fled the Islamic Republic of Iran due to repression, told the Post that "today, the people of Saravan continued their protest against the Islamic Republic's massacre and cruelty, and the whole province joined them by blocking the main roads.

"Iranians inside Iran and all around the world are trying to be their voice after the regime cut off the internet in Saravan," she said. "As a result of today's regime cruelty, Iranians are calling for a nationwide uprising which has been expected to happen since November 2019."

Nationwide protests erupted in Iran over rising fuel prices in 2019. According to a Reuters article, Iran's regime murdered at least 1,500 people for their peaceful protest at the time. Vojoudi added that "The people of Iran are fire under ash and the regime knows it perfectly.

Baluchi activists called for a strike in the whole province. Hopefully, we [will] see another Iran protest and more support from the international communities. Once again, IRGC opened fire on unarmed civilians. I'm waiting for the international reaction, especially now that they're trying to save the JCPOA."

The Joint Comprehensive Plan of Action, known as the Iran deal, is supposed to curb Iran's nuclear activities in exchange for sanctions relief.

Radio Farda reported that five people were injured on February 23 during the violence.

The IRGC used live fire on protesters, causing the deaths and wounded.

Iranian border guards opened fire on protesters at a police station in Taftan in southwestern Baluchistan, which resulted in the death of one protester and several injured. Mohammad Hadi Marashi, deputy governor of the Sistan and Baluchestan Province, told Iranian state TV about the clash at the police station.

The IRGC has sought over the years to stop fuel smuggling in the impoverished desert province by "digging holes" along the border, Radio Farda reported, adding that fuel traders have resisted because of the need to earn a living.

According to the radio station, The European-based Campaign of Baluch Activists said several demonstrators had been injured and that police used tear gas to disperse them.

Former Canadian ministers of justice and former Canadian judges, among other from the country's legal profession, published a public letter in February to the Iranian regime's Chief Justice Ebrahim Raisi, stating: "The year 2020 brought an alarming new chapter in this saga, when two Iranian courts issued judgments that declared ownership of lands by 27 BahÃ¡'Ã­s in the village to be illegitimate on the basis of their religious belief."

The authors noted that "under the current Iranian government, BahÃ¡'Ã­s have experienced home raids, attacks on properties, confiscation of possessions, dismissals from employment, denial of access to higher education, imprisonment and execution. BahÃ¡'Ã­s have sought legal remedies, but to little avail. Recently, one of the oldest BahÃ¡'Ã­ communities in Iran has come under intense attack."

Iran's regime faced severe criticism for publicly hanging a woman three days ago after she suffered a heart attack.

The Islamic Republic's opaque judicial system convicted Zahra Ismaili for the murder of her husband Alireza Zamani, sentenced to be hanged at Rajai Shahr Prison â roughly 20 miles outside of Tehran.

According to a report in the British daily The Sun, her lawyer Omid Moradi said "they hanged her lifeless body." The lawyer said they did it so that "her husband's mother could exercise her right to kick away the chair from under her."

Zahra Ismaili's death certificate noted "cardiac arrest" as the cause of her death.

"He said her husband was an official of the Iranian intelligence ministry and that he was abusive to his family, so she acted to defend herself and her daughter," according to The Sun.