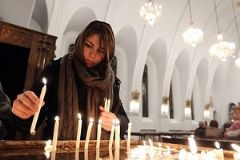 Iranian Christians are in dire straits in the Islamic Republic because of a new wave of regime repression that has largely not registered in the media due to the country's economic free fall and popular uprising by a people fed up with the tyrannical nature of the regime. The mullahs have launched a cut-throat campaign to silence their opponents, and on top of their list are Iran's persecuted Christians â an ancient people of the land the regime stigmatizes as a gateway to the West.

On August 9, an organization â Article 18 â that promotes religious freedom in Iran, reported that a court in Boushehr had sentenced a couple of Christian converts and ten other Iranians to one year in prison each for "propagating against the Islamic Republic in favor of Christianity."

The sentence came just weeks after Iran's President Hassan Rouhani â often portrayed in the West as a reform-minded moderate â had vowed that "Christians have the same rights as others do."

Christianity, of course, is not alien to Iran where it arrived in Persia not long after the death of Christ. There are believed to be an estimated 350,000 Christians in Iran, with a growing trend toward converting to Christianity. Iran's Statistical Center reports 117,700 Christians in a country of just over 82 million people.

The real number of Iranian Christians probably exceeds 350,000 because of the anti-Christian conditions they face in the country. Turning inward not to expose oneself to the dangers of practicing Christianity has become a survival strategy in Iran.

The law heavily discriminates against non-Muslims, who have been barred from all influential positions in central state organs since the Islamic Revolution of 1979. Blasphemy and apostasy remain capital offences.

The persecution of Iran's Christians is well-documented and is not limited to Evangelicals. Last year, Iran's Islamic Revolutionary Guard Corps (IRGC), arrested two Christians â a mother and her son â as part of a vicious crackdown on Catholicism in the country's West Azerbaijan Province.

The U.S. administration of President Donald Trump designated the IRGC as a terrorist organization in October 2017. The 125,000-member-strong IRGC has a long record of brutality targeting Christians and democracy movements opposed to the mullah regime.

A 2018 report by the Commission for International Religious Freedom observed that, "In the past year, religious freedom in Iran continued to deteriorate for both recognized and unrecognized religious groups, with the government targeting Baha'is and Christian converts in particular."

Four evangelical Christians were arrested in May 2017 and sentenced each to 10 years in prison for house church activities and evangelism.

Pastor Youcef Nadarkhani stood trial in July along three co-defendants because of their house church activities. They were all sentenced to 10 years in prison. It is worth recalling that Nadarkhani was previously sentenced in 2010 to death for his conversion to Christianity. After a global pressure campaign ensued, Iran's regime released him from prison, after a three-year incarceration. Over 70,000 people signed a petition urging Iran's judiciary to release Nadarkhani.

In June 2017, an Iranian court sentenced Pentecostal Assyrian Church Pastor Victor Bet Tamraz and three other members of his community to 10 or 15 years each in prison because of their faith.

Iran has a choice to make. As a signatory of international human rights declarations, the Islamic Republic must adhere to basic humanitarian law â including freedom of religion and belief â or is rightly castigated as a pariah in the family of nations.

The U.S. imposed economic sanctions on Iran's precious metal trade, automobile sector and use of U.S. currency in August. A powerful second round of U.S. economic penalties will hit Iran's oil and financial sectors in November.

To isolate Iran's clerical leaders â and hold those accountable for grave human rights violations â the EU and U.S. should impose a potent round of human rights sanctions on regime officials persecuting Iranian Christians.

The Islamic Republic remains highly vulnerable when a spotlight is shined on their widespread repression of religious freedom. If past is prologue, new human rights sanctions and global pressure can save the lives of persecuted Iranian Christians.