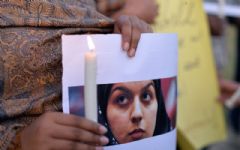 On October 25, 2014, days after President Obama reportedly sent a secret letter to Iranian Supreme Leader Ali Khamenei offering regional security cooperation in return for Tehran's acceptance of an elusive nuclear deal, Iran hanged Reyhaneh Jabbari, a 26-year-old woman convicted of stabbing to death a former Iranian intelligence ministry official who was trying to rape her. Iranian Supreme Leader Ali Khamenei declined calls for clemency from the United Nations and international human rights groups, ignoring evidence that Iranian authorities had tortured her to obtain a confession and pressured her to use an inexperienced lawyer. "Tragically, this case is far from uncommon," Amnesty International's Hassiba Hadj Sahraoui lamented.

The world is rightly focused on Iran's growing nuclear threat and the regime's destabilizing support for international terrorism. Yet Iran's state of injustice-the regime's systematic human rights abuses and suppression of the Iranian people's aspirations to be free-deserves equal attention.

A new report by the United Nations' special rapporteur on human rights in Iran, Ahmed Shaheed, helps cast light on the regime's dark record. The Shaheed report blasts Iran's growing use of executions, with 687 in 2013 and already 411 in the first half of 2014. Under Iranian law, citizens can face executions for a shockingly broad range of non-violent crimes, including "adultery, recidivist alcohol use, drug possession and trafficking" and corruption, in addition to moharebeh (sometimes translated as "enmity against God"). Indeed, the report observes that the regime in Tehran, in practical terms, is disproportionately executing individuals from religious and ethnic minority groups "for exercising their protected rights, including freedom of expression and association."

Iranian authorities are also continuing the "widespread and systematic use" of psychological and physical torture to obtain confessions, the Shaheed report warns. Tactics include "prolonged solitary confinement, mock executions and the threat of rape, along with physical abuse, including severe beatings, use of suspension and pressure positions, electroshock and burnings," in addition to flogging and amputations. Moreover, the regime in Tehran continues to suppress freedom of expression by actively targeting, harassing, and detaining reporters and bloggers-indeed, at least 35 journalists are being detained today. It also blocks around five million websites dedicated to arts, social issues, and news, and takes severe steps to filter the content of blogs and social media.

The Shaheed report should be required reading for those in Washington who dream of an American-Iranian alliance against the Islamic State and argue that Iranian President Hassan Rouhani is a moderate reformer. These egregious violations of human rights continue more than a year after Rouhani ascended to Iran's presidency.

Indeed, Dr. Shaheed has noted that Rouhani has only "limited authority" to change the system of which he is a creature. The Obama administration should take note of the fundamental continuity in the regime's destabilizing behavior. Just as the Iranian people continue to suffer under Rouhani, so too have Iran's nuclear evasions and lethal support to terrorist proxies like Hezbollah and murderous like Syria's Assad regime continued apace.

As the United States and its partners attempt to finalize a nuclear deal with Iran, we believe that the United States and other democracies must do more to back up growing attention to Iran's human rights violations with concrete actions to stop and reverse these abuses. That's why earlier this year we introduced theIran Human Rights Accountability Act of 2014, not only to crack down on Iranian human rights abusers, including Khamenei and President Rouhani, but also to support the Iranian people's democratic aspirations.

While Secretary of State Kerry has referred on occasion to Iran's human rights record as "abysmal," the Obama administration has done precious little to pressure Iran on this front. In fact, the rare tough talk of American diplomats has become outpaced by growing references to their blossoming friendship with Iranian regime officials. "It's reached a level of we know each other well enough to make jokes," a senior U.S. official recently gushed to reporters.

What does our desperation to get a nuclear deal at all costs say to the modern-day Iranian Solzhenitsyns rotting in Evin prison? Or to the young social-media savvy generation who took to the streets in 2009 after Mahmoud Ahmadinejad's fraudulent reelection?

In 2009, President Obama left these Iranians questioning America's commitment to their cause. Who will stand up today for those Iranians aspiring to be free or simply to live in a society in which their wives, sisters, and daughters can live without fear of horrific personal attacks because of how they dress?

The advance of human dignity in Iran will have much more to do with whether the regime in Tehran truly decides to change its illegitimate and destabilizing course and become a responsible actor on the world stage than any document it signs in Geneva or Vienna.

In the meantime, we need to do much more to help the Iranian people bring about the day when young women like Reyhaneh Jabbari are able to live their lives to their full potential.