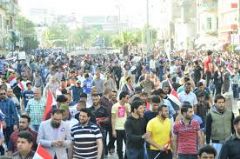 Iraqi security forces opened fired on anti-government protesters gathering in Baghdad Friday for a fourth day of demonstrations against unemployment, poor public services and corruption. The security forces fired directly at the protesters, not in the air, an AFP correspondent said.

No casualties have been reported.

The International Committee of the Red Cross (ICRC) issues a statement Friday saying "the deaths of civilians and the growing number of wounded at the ongoing protests across the country is particularly worrying, as is the use of firearms for restoring public order."

The ICRC has called on both sides to show restraint as it monitors developments on the ground.

Earlier, Iraq's Prime Minister Adel Abdul-Mahdi, during a televised address to the nation, called on protesters to go home, saying their "legitimate demands" had been heard.

Abdul-Mahdi sad that the security measures, including the temporary curfew imposed were "difficult choices" but they were needed like "bitter medicine" that had to be swallowed.

At least 42 people have been killed in protests since Tuesday and hundreds of others have been wounded. The demonstrations have spread in Baghdad and in areas south of the capital. Iraqi security forces used tear gas and fired live bullets Thursday to disperse protesters in Baghdad.

In addition, authorities have deployed water cannons and rubber bullets to try to break up the crowds.

A police officer and hundreds more have been injured since the protests began.

There were widespread reports of internet outages on Thursday.

The protests are the first major challenge to Abdul-Mahdi, who formed his government a year ago.

The government blamed the violence on "groups of riot inciters" and said security forces worked to protect the safety of peaceful protesters.

Iraq's parliament has ordered a probe into the violence.

Many Iraqi citizens blame politicians and government officials for the corruption that has prevented the country from rebounding from years of sectarian violence and the battle to defeat Islamic State militants who at one point controlled large areas in the northern and western part of the country.

At his weekly Cabinet meeting earlier this week, the prime minister released a statement promising jobs for graduates. He also ordered the oil ministry and other government agencies to apply a 50 percent quota for local workers in future contracts with foreign countries.