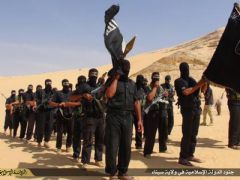 The decapitated bodies of a father and his two sons recently kidnapped by Islamic militants were found on Saturday lying in the street in the northern Sinai town of Rafah, according to security officials and witnesses - the latest grotesque act of brutality in the country's long-running insurgency.

They said the mother of the two siblings was killed last week by members of the Islamic State group when they raided the family home in the village of Yamit, west of Rafah, and kidnapped the three men they suspect of being collaborators.

The three decapitated bodies found Saturday were taken to hospital, where they were identified and prepared for burial, according to the officials and witnesses, who spoke on condition of anonymity because they were not authorized to speak to the media and feared reprisals, respectively.

IS is spearheading an insurgency in northern Sinai, where there has recently been an uptick in the abduction and killing of suspected informants. The brutal killings are meant to serve as a deterrent to would-be collaborators.

Islamic militants have been fighting security forces in northern Sinai for years, but the insurgency has grown deadlier and expanded since the military's 2013 ouster of an Islamist president - Mohammed Morsi of the now-outlawed Muslim Brotherhood - whose one year in office proved divisive.

Lately, the militants have targeted Egypt's minority Christians, forcing hundreds of them to flee their homes in northern Sinai after killing several of them there. Since December, it has targeted three churches - one in Cairo and two north of the Egyptian capital - with suicide bombings that killed at least 45.

An IS leader in Egypt vowed this week to escalate attacks against Christians, urging Muslims to steer clear of Christian gatherings and western embassies as they are targets of their group's militants.

"Targeting the churches is part of our war on infidels," the unidentified leader said in a lengthy interview published by the group's al-Nabaa newsletter on Thursday. He said churches, security posts and institutions, as well as places where "crusader nationals of western countries" gather were all "legitimate targets."

Separately, the Interior Ministry announced on Saturday that policemen on the trail of members of Brotherhood breakaway factions that have taken up arms against the government have located and shot dead two operatives in a gunbattle north of Cairo. It said the two were involved in a bomb attack that killed two policemen and injured others last month in the city of Tanta north of Cairo.

Also on Saturday, a criminal court in Cairo accepted an appeal by the prosecution against a release order issued on Thursday in favor of a senior leader and financier of the Brotherhood, businessman Hassan Malik, who has been in detention for two years but never faced trial.

Malik, arrested in 2015 on charges that he plotted to harm the national economy, was ordered Saturday to remain in police custody for 45 days.