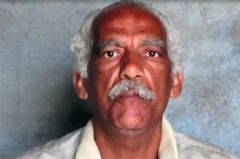 Video of a terror group in Egypt with ties to the Islamic State executing one Coptic Christian and two tribesmen is making the rounds online - as the country's Interior Ministry revealed Monday that it had killed three suspects in the slayings.

The 13-minute video, released late Saturday, showed 62-year-old Nabil Habashi Salama being shot in the back of the head with an AK-47 in the middle of what appeared to be the Egyptian desert.

Three armed militants with their faces blurred stood behind Habashi Salama, who had helped build the sole Coptic church in the area, as he was murdered.

Shortly after, the same three militants took out two tribesmen, whom they accused of fighting with the Egyptian armed forces.

The Coptic Orthodox Church represents between 10 and 15 percent of Egypt's 100 million people.

The Christians, along with Egyptian security forces, have been the primary targets of ISIS attacks.

"As for you Christians of Egypt, this is the price you are paying for supporting the Egyptian army," one of the militants said in the video, after Habashi Salama said his church had been cooperating with law enforcement to combat terrorism.

In a statement released Sunday, a spokesperson for the church confirmed Habashi Salama's killing and praised him for not abandoning his faith.

"He kept the faith till the moment he was killed," the church said, adding that it wanted to affirm "its steadfast support of the Egyptian state's efforts in quelling hateful terror acts."

Egyptian police said they killed some of the suspects from the video while exchanging gunfire with a group of six Islamic State-affiliated militants in the Abtal area of North Sinai province.

Three of the men were not killed and are still wanted by Egypt.

There were no casualties among the security forces.