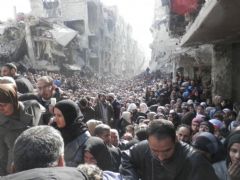 Syrians in the Yarmouk refugee camp

The Islamic State militant group (ISIS) has beheaded rival jihadis and one civilian in Yarmouk refugee camp in Syria, according to activists.

The reports emerged on Friday amid claims that the Syrian regime is aiding ISIS's growth in the besieged area of Damascus.

Salim Salamah, a Syrian refugee who spent 22 years in Yarmouk before fleeing to Sweden in late 2012 and is now head of the Palestinian League for Human Rights in Syria, tells Newsweek that ISIS has slit the the throats of four Nusra Front fighters and one civilian in the besieged camp.

He adds that Nusra fighters have killed three ISIS fighters in similar fashion, and recent clashes between the two radical Islamist groups have left at least eight civilians dead.

The confirmation of the brutal killings comes just days after the Palestine Liberation Organization (PLO) envoy to Syria, Anwar Abed al-Hadi, said that ISIS militants had executed, beheaded and raped Palestinian residents of the camp.

The group now controls at least 60 percent of the camp, according to Salamah and al-Hadi, who puts the estimate higher at 70 percent. ISIS entered the embattled Palestinian camp in April 2015 before being pushed back by Palestinian factions, it has since increased its territorial hold within the camp again after capturing territory held by the Nusra Front, aided by defections by Nusra fighters.

The population of the camp has continued to fall amid a siege by the jihadi groups and the Syrian regime of President Bashar al-Assad, down to around 5,000 from 15,000 in 2015 as thousands move to other besieged areas of the Syrian capital.

Salamah says that the Syrian regime is still carrying out military action in the camp but it is not targeting ISIS militants, only Nusra fighters, an Islamist Syrian rebel group seeking to topple Assad. The claim suggests that Assad's forces are allowing the group to grow at the expense of the rebel group and the Palestinian residents of the camp.

"The bombardment of the regime is targeting areas either bordering or within the area of Nusra. This is not happening in the case of the territory of ISIS," he says, according to information from the Palestinian League for Human Rights in Syria's sources within the camp.

While concrete estimates of ISIS fighters within the camp are difficult to verify, al-Hadi estimated there to be some 3,000 militants in the camp and the neighboring Hajr al-Aswad suburb, while Salamah puts the number at "2,000 maximum."