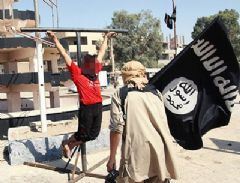 "Those who break Ramadan are being crucified on electricity poles in Deir ez-Zor," eyewitnesses told ARA News.

"The roads are filled with crucified men who violated the group's strict regulations during Ramadan. There are dozens of victims who remain hanged on electricity poles across the province."

Speaking to ARA News in Deir ez-Zor, media activist Saray ad-Din reported that since the start of Ramadan, the IS group has punished dozens of civilians on charges of deliberately breaking fast.

"The group made many cages to lock up these 'fasting violators' and show them to public in order to humiliate them among people. The alleged caliphate of al-Baghdadi has seen various kinds of punishments during Ramadan," the source said.

"The radical group has crucified and executed many people on charges of breaking the fast in the cities of Deir ez-Zor, al-Bukamal, Hatlah, Mayadeen and Sabha in eastern Syria."