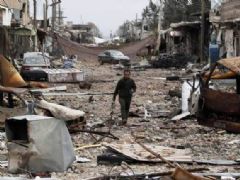 The rubble of Kobani

Raqqa Is Being Slaughtered Silently

Isis is reportedly forcing people living under its self-declared 'caliphate' to give blood after dozens of fighters were seriously injured in US-led coalition air strikes.

Raqqa is Being Slaughtered Silently (RBSS), a group run by Syrian activists, said the extremist group is coercing citizens in its defacto capital of Raqqa, in Syria, to take part in transfusions.

Abu Mohammed Hussam, one of the campaign's founders, told The Independent up to 100 people had been forced to give blood over the past few days. Last month, a former Yazidi teenager captured and used as a sex slave by the group described how militants were forcing hostages to give their blood for transfusions.

He said this sudden drive for blood was to treat dozens of fighters badly wounded by air strikes in Kobani. Isis were forced to withdraw from the border city following a two-pronged attack from Kurdish fighters and coalition air strikes. Most of those made to give blood have reportedly been men, although he says one woman has also been ordered to do so.

Mr Hussam, 26, graduated from the Faculty of Law in Damascus before travelling to Raqqa when civil war broke out to become an activist.

He said: "I went to Raqqa in 2011 to join the revolution against [Syrian President] Bashar-al-Assad. Me and my friends later founded the Raqqa is Being Slaughtered Silently campaign."

Mr Hussam says he fled Raqqa weeks ago when it became clear that Isis militants were looking for him, and is now working to communicate information and news from outside of the besieged city.

However, some of his friends and family remain inside the city walls and are living under Isis, including twelve members of RBSS.

He says they have passed on information about conditions under Isis' self-declared caliphate through internet cafes still running. Militants have been clear that people are prohibited from publishing anything negative about the group. "They are always watching," Mr Hussam added.

Reports of wounded fighters come as it emerged suicide bombers and foreign fighters were abandoning their posts and fleeing to Turkey or defecting to rival Islamist groups.

A US-led coalition bombing campaign against the group was recently intensified after it burned alive a Jordanian pilot and released footage of his death.