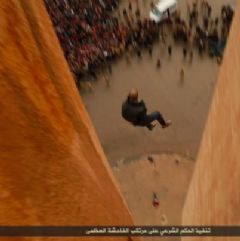 A gay man thrown off a building by ISIS

Thieves have their hands cut off, while non-believers are shot in the back. Meanwhile, non-straight people - whom ISIS calls the "worst of creatures" - are thrown off roofs. One man who had premarital relations received lashes.

One horrific picture shows a man standing on the edge of a building, about to plunge to his death; the next photo in the series shows him falling, and the third shows him dead, with his blood splattered on the ground, as ISIS terrorists continue to stone the dead body.

Another picture showed a man with his eyes covered, after his hand had been chopped off for thieving. Yet another shows a man who had been shot in the back of his head as "punishment" for leaving Islam.

While the current incidents occurred in the Syrian city of Deir ez-Zor, ISIS torture occurs anywhere the terrorist organization has control.

Meanwhile, the Syrian government expects to launch a massive military operation against ISIS.

A Human Rights Campaign report said ISIS "has unleashed a reign of terror against civilians and vulnerable minorities living in areas it has seized, including barbarous violence against LGBTQ people. ISIS' extreme ideology is interpreted by its followers to require the death penalty for those who engage in sexual relations outside of heterosexual marriage, including same-sex sexual relations."